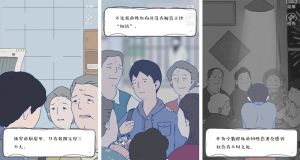 Screenshots from ‘A Gay’s Life’, which has logged more than a million players so far.

In the two decades since homosexuality was decriminalised in China, discrimination against LGBTI people has eased. But while being gay is no longer classified as a mental illness, Huang Gaole felt there was a need to document the challenges facing young homosexuals in China.

So he developed A Gay’s Life, an interactive video game that tells the story of a young man called Ling Hao, which is based on Huang’s own experiences as a young gay man in China.

A Gay’s Life charts Ling’s progress from his sexual awakening in small-town China to his move to the big city for college, his relationships and the trauma of dealing with his family when he finally comes out. The game has proven a sensation, with more than a million players so far.

“I wanted to use my own perspective to record LGBTI lives and stories during this era of Chinese history, to call for empathy from mainstream society and promote diversity and tolerance,” said Huang (27), who hails originally from Shandong province and studied in Beijing.

What inspired Huang to develop the game were some of the phenomena he witnessed in gay circles in China.

“I witnessed a lot of self-hatred. Some gays are afraid of being found out to be homosexual – some even would rather die than get treatment for HIV/Aids. Some gays will lie and marry women and then cheat on their wives,” he told The Irish Times.

Over the course of A Gay’s Life, players must answer questions that ultimately decide Ling’s fate, from happily settling down with a dream partner to marrying a woman to hide his sexuality, or even becoming a monk. One option sees Ling sent to undergo conversion therapy.

“When [gay dating apps] Jack’d and Blued appeared, it offered a faster way to find partners, while in society there was also the attitude that people were not for or against, as long as homosexuals remained low profile. Therefore, many homosexuals decided to live their own lives quietly,” said Huang.

One player is Nicolas (36), who works in a media company in Guangzhou and married his partner in 2017 in Las Vegas.

“We decided to get married a couple of days before our trip to the US and after one hour in Las Vegas, it was done. My parents still don’t know I am gay, and I am not going to tell them,” said Nicolas.

Both he and his partner have sisters who are aware of their marriage.

“They have no problem with that at all. Everybody has stress and being gay is more stress. However, I am a very positive person. In the big cities, we don’t have much social pressure but in small cities it is more difficult to be gay,” he said.

Broader discrimination is easing, especially as China’s cities expand and there is increased scope to live a more private existence, but social attitudes have struggled to keep pace with the frenetic pace of economic change. And occasionally there are events that act as a reminder that the broader view is still disapproving of homosexuality.

In April, the social network Sina Weibo tried to ban gay-themed content to “purify” the online environment, but the ban was withdrawn several days later after a huge public outcry.

Then, in May, one of China’s biggest broadcasters was banned from showing the Eurovision Song Contest after it censored LGBTI content, including the song Together by Ireland’s Ryan O’Shaughnessy.

“I can clearly feel that the lifestyles, world views and ethnical frameworks of homosexuals vary from mainstream heterosexual attitudes,” Huang said.

Huang studied sociological texts but found them too far removed from his life and experience. “So I wanted to use a more friendly, understanding, fully emotional and interesting approach. Interactive gaming shapes the characters and allows them to explain the embarrassing situations they can face,” he said.

To ensure the game did not fall foul of censors, Huang used already published works of sociology and psychology as a yardstick.

“This work is meant to document and educate, so many readers can understand the life of gay people that they never knew before,” said Huang.

China does not have any religious basis that discriminates against homosexuality, and Huang has rarely heard of someone getting kicked out of a restaurant, losing a job or a college place for being gay.

But very few are willing to come out to their family, and he hopes the game will help LGBTI people be true to themselves.

“This is the aim of affirmative action, instead of cheating others to live like heterosexuals,” he said.

China has strong notions of filial piety, a significant element of the Confucian code that underscores traditional Chinese society. This has made it difficult for LGBTI people, particularly when facing pressure to produce a son.

This requirement remains particularly strong in rural China, where the chief aim of a marriage has long been to produce a son to work on the farms and look after the parents in old age.

“However, we have entered the industrial society, this system is not working anymore and people will not secure their retirement by having a son as the only way,” said Huang.