Protests erupt in Maldives as outgoing president stays on 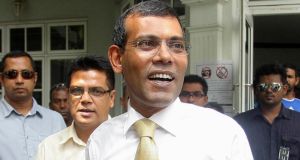 Maldives police clashed with hundreds of protesters today after outgoing president Mohamed Waheed said he would remain in power after his term ended, defying the opposition-led parliament and throwing the country deeper into crisis.

Mr Waheed was to have stepped down yesterday, but when no candidate won the necessary 50 per cent of votes in a long-delayed presidential election the previous day, the Indian Ocean archipelago was essentially left in constitutional limbo.

“Since the constitution does not state what must happen, the Supreme Court has decided the government will continue instead of going into a constitutional void,” Mr Waheed declared overnight, just minutes before his tenure officially ended.

Mohamed Nasheed, who became the first democratically elected president of the holiday paradise in 2008 but who was forced from office in disputed circumstances last year, led after the first round with 47 per cent of votes.

In 2008, Mr Nasheed defeated Maumoon Abdul Gayoom, who had ruled for 30 years and was accused by opponents and international rights groups of being a dictator.

Gayoom loyalists, including a half-brother, who also ran in Saturday’s vote, now oppose Mr Nasheed’s bid to return to power.

Mr Nasheed’s political party, which dominates parliament, wanted one of its members to run the country until the second round of voting on November 16th. But in a tussle between Mr Nasheed and the old guard he is seeking to replace, that decision was overruled.

Mr Nasheed, famous for holding a cabinet meeting underwater to highlight the threat of global warming to the low-lying archipelago, will contest the runoff vote against Mr Gayoom’s half-brother, Abdulla Yameen.

After Mr Waheed announced his intention to remain in power, about 1,000 opposition supporters took to the streets of the capital, Male, and threw stones at police, who responded with pepper spray and batons to break up the crowd.

The protests died down in the early hours, and Mr Waheed was last seen leaving Male in a speedboat, accompanied by his wife and flanked by security.

Western countries and neighbouring India have looked on with growing concern as two previous attempts to hold presidential elections were aborted.

The vote, decided by an electorate of some 240,000 people, finally did go ahead on Saturday and the run-off between the leading two candidates was scheduled for the next day to avoid a constitutional crisis.

But the Supreme Court, which has largely acted in line with demands made by Mr Nasheed’s rivals, delayed it until November 16th, in a further challenge for a country known more for its luxury beaches than recent bouts of unrest.

“It is unreasonable and unacceptable for parties to continue to demand changes to an agreed election date,” the US State Department said in a statement at the weekend.

A September 7th vote was annulled based on a secret police report which found vote rigging, while an October poll was halted by police after a Supreme Court ruling.

The crisis has already hit tourism, a vital source of revenues, and the Maldives has faced fuel shortages because it is unable to pay suppliers on time amid dwindling foreign exchange reserves.

Whoever wins the election will also have to tackle a rise in Islamist ideology and declining investor confidence.