Philippines president swears to God that he will stop cursing

Philippine President Rodrigo Duterte has made a promise to stop swearing, saying God spoke to him during a flight from Japan. Video: Reuters 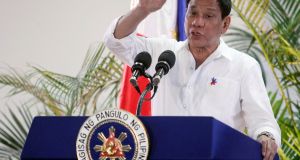 Famously sweary Philippines president Rodrigo Duterte, who called Pope Francis a “son of a bitch” and told US president Barack Obama to “go to hell” has said he promised God in a dream that he would stop cursing.

On his arrival back in his home city of Davao after a three-day visit to Japan, the controversial leader said that God had spoken to him, threatening to bring the aircraft down mid-air unless he promised to drop the expletives.

“While I was coming over here, everybody was asleep, snoring. But a voice said if you don’t stop epithets I will bring this plane down,” he said, quoted by the Davao Today newspaper.

“I said who is this? Of course, it’s God. Okay, so I promised God to not to express slang, cuss words,” he said.

Mr Duterte’s fondness for profanities has become his trademark, especially when discussing his war on illegal narcotics that has left thousands dead since he came to power in June.

After the EU criticised the extrajudicial killings of thousands suspected of involvement in the drugs trade, he raised his middle finger in an insulting gesture and said: “Even the EU is scolding me …When I was mayor, that was okay, but it is different now because I am the president. Why would you insult me? It is as if I am your subordinate … F**k you.”

However, he said there was a time and place for profanity, especially when it came to the United States, the European Union or his political nemesis, his archrival Senator Leila de Lima.

“I don’t like anybody reading my mind. It’s all calibrated, it’s always timing,” he said.

Church leaders in the overwhelmingly Catholic Philippines have criticised his profanity, and Mr Duterte promised to give 1,000 pesos (€19) to the Caritas charity every time he swore, but his sweariness continued unabated after he made the pledge.

He called Mr Obama a “son of a whore” after the US criticised his administration’s human rights record, and after a meeting, he called outgoing US ambassador Philip Goldberg a “gay son of a bitch”. The incendiary leader recently returned from a trip to China where he cosied up to the ruling Communist Party, despite regional territorial rivalries, and spoke of his wish to separate from the US, comments he has since rolled out.

Mr Duterte said his manner of speaking was in tune with the suffering of the people of the Philippines. “Listen to my cursing. Listen to it carefully. I invite you to just really look at me and relate those words to my character.

Because behind those words is the real tragedy and agony of the Filipino people,” he said.

He went on to say: “a promise to God is a promise to the Filipino people”, which earned a round of applause, although he told them not to clap too much “or else this may get derailed.”