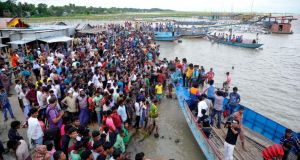 Locals and relatives gather at a beach after a ferry carrying at least 250 passengers capsized on the Padma River in Lauhajang, Bangladesh. Some 116 people are feared missing. Photograph: EPA.

Rescuers are struggling to locate a sunken ferry that was carrying hundreds of passengers when it capsized in a Bangladesh river.

After the MV Pinak sank yesterday, at least 44 passengers swam safely to shore. The head of Bangladesh’s water transport authority said about 50 people were unaccounted for, while local administrators received a list of 116 missing people from relatives and villagers.

It was not known exactly how many people were on board the boat because ferry operators in Bangladesh rarely maintain passenger lists. Local media said there were about 250 passengers, but the figure could not be immediately confirmed.

A salvage ship reached the site in the River Padma today, but strong currents and high waves were preventing a rescue operation from being launched, said shipping minister Shahjahan Khan.

Yesterday, local residents and rescuers recovered two bodies from the water, but many more were believed to be trapped inside.

Many of the passengers aboard the ferry were returning from ancestral villages after celebrating Eid al-Fitr, the festival marking the end of the Islamic fasting month of Ramadan.

Azizul Haque, who was among those who survived by swimming to shore, said he jumped overboard when it became clear the ferry was going down.

“The ferry went out of control due to winds and currents, tilting from one side to the other,” the 30-year-old said.

“Then the captain jumped out because he probably understood it was sinking. The river was rough, and there were many passengers on board.”

The ferry capsized in the Padma River in Munshiganj district, about 28 miles south of Dhaka, Bangladesh’s capital.

As news spread of the accident, about 500 people, including relatives of the missing, gathered by the water, many of them weeping and holding photos of their loved ones.

Scores of people die in ferry accidents every year in Bangladesh, where boats are a common form of transportation.

The Padma is one of the largest rivers in the delta nation, which is crisscrossed by more than 130 rivers.

Poor safety standards and overcrowding are often blamed for the accidents. In May, about 50 people died in a ferry accident in the same district.

The ministry of shipping has ordered an investigation into the latest tragedy, giving a 10-day deadline.