Rescuers dig through rubble with bare hands in Kathmandu region 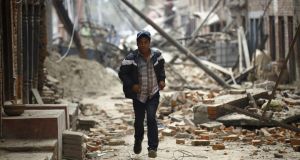 A man runs past damaged houses as aftershocks of an earthquake are felt a day after the earthquake in Bhaktapur, Nepal. Photograph: Navesh Chitrakar/Reuters. 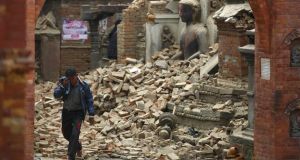 A man cries as he walks on the street while passing through a damaged statue of Lord Buddha a day after an earthquake in Bhaktapur, Nepal. Photograph: Navesh Chitrakar/Reuters. 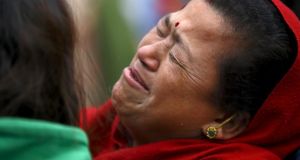 A woman mourns the death of a family member a day after a 7.9 magnitude earthquake in Bhaktapur, Nepal. Photograph: Navesh Chitrakar/Reuters. 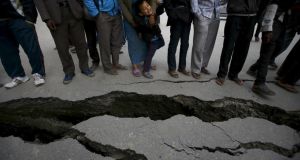 People gather near the cracks on the road caused by an earthquake in Bhaktapur, Nepal. Photograph: Navesh Chitrakar/Reuters. 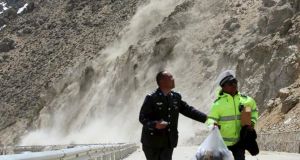 People run away from a landslide triggered by a tremor, after a 7.9-magnitude earthquake hit Nepal on Saturday, in Nyalam county, Tibet Autonomous Region. REUTERS/Stringer

A fresh 6.7 magnitude aftershock in Nepal on Sunday hampered efforts to find survivors of a more powerful earthquake the day before that killed more than 2,400 people.

The tremors prompted authorities to temporarily halt flights into Kathmandu, the capital, where thousands of people are camping outdoors.

At least 2,400 people are now confirmed dead in the massive earthquake that hit just outside Kathmandu, an official in Nepal said on Sunday.

Deputy inspector general of police Komal Singh Bam gave no further details. Saturday’s 7.8 magnitude quake struck Nepal before noon and was most severely felt in the capital and the densely populated Kathmandu Valley.

A strong earthquake aftershock struck India and Nepal on Sunday, shaking buildings in New Delhi and triggering an avalanche in the Himalayas.

The United States Geological Survey said the tremor was 6.7 magnitude, less than the 7.9 quake that struck the region on Saturday killing at least 2,152 people.

The US Geological Survey says the aftershock on Sunday registered at a shallow depth of 9km. It said aftershock damage was very likely within a radius of about 50km.

“Another one, we have an aftershock right now,” Indian mountaineer Arjun Vajpai said by telephone from advanced base camp on Mount Makalu, 20 km from Everest.

Rescuers dug with their bare hands and bodies piled up in Nepal on Sunday after the initial an earthquake which devastated the heavily crowded Kathmandu valley.

Army officer Santosh Nepal and a group of rescuers worked all night to open a passage into a collapsed building in the capital. They had to use pick axes because bulldozers could not get through the ancient city’s narrow streets.

“We believe there are still people trapped inside,” he said, pointing at concrete debris and twisted reinforcement rods where a three-storey residential building once stood.

In Everest’s worst disaster, the bodies of 19 foreign climbers including a Google Inc executive, were recovered from the mountain on Sunday after being caught in avalanches. A plane carrying the first 15 injured climbers landed at Kathmandu airport at around noon local time (6am Irish time).

“There is a lot of confusion on the mountain. The toll will rise,” said Gelu Sherpa, one of those among the first 15 injured climbers flown to Kathmandu. “Tents have been blown away.”

Hundreds of climbers, many foreigners, remain stranded on the mountain.

With the government overwhelmed by the scale of the disaster, India flew in medical supplies and relief crews, while China sent in a 60-strong emergency team.

Relief agencies said hospitals in the Kathmandu Valley were overflowing and running out of medical supplies.

In a statement, Minister for Foreign Affairs Charlie Flanagan said his department was aware of some 50 citizens in the affected region.

“Contact has already been established with many of them. Communications lines have been affected so this is an ongoing process that may take some time,” he said.

Among Kathmandu’s landmarks destroyed in the earthquake was the 60-metre Dharahara Tower, built in 1832 for the queen of Nepal, with a viewing balcony that had been open to visitors for the last 10 years.

A jagged stump was all that was left of the lighthouse-like structure. As bodies were pulled from the ruins on Saturday, a policeman said up to 200 people had been trapped inside.

Bodies were still arriving on Sunday morning at one hospital in Kathmandu, where police officer Sudan Shreshtha said his team had brought 166 corpses overnight.

“I am tired and exhausted, but I have to work and have the strength,” Mr Shreshtha said as an ambulance brought three more victims to the Tribhuvan University Teaching Hospital.

Bodies were heaped in a dark room; some covered with cloth, some not. A boy aged about seven had his face half missing and his stomach bloated like a football. The stench of death was overpowering.

Outside, a 30-year-old woman who had been widowed wailed: “Oh Lord, oh God, why did you take him alone? Take me along with him also.”

Save the Children’s Peter Olyle said hospitals in the Kathmandu Valley were running out of storage room for bodies and emergency supplies.

“There is a need for a government decision on bringing in kits from the military,” he said from the city.

Some buildings in Kathmandu toppled like houses of cards, others leaned at precarious angles, and partial collapses exposed living rooms and furniture in place and belongings stacked on shelves.

Rescuers, some wearing face masks to keep out the dust from collapsed buildings, scrambled over mounds of splintered timber and broken bricks in the hope of finding survivors. Some used their bare hands to fill small white buckets with dirt and rock.

Thousands of people spent the night outside in chilly temperatures and patchy rain, too afraid to return to their damaged homes.

Nepal’s police put the death toll at 1,910, with 4,625 hurt. At least 700 were killed in the capital, a city of about 1 million people where many homes are old, flimsy and packed close together.

There was nearly 1,000 climbers and sherpas on Everest when the avalanche struck, claiming the highest toll of any disaster on the world’s highest mountain.

Climber photographs on social media sites showed tents and other structures at Everest base camp flattened by rocks and snow. The first reported photo of the avalanche showed a “cloud-like” mass of snow and rock descending down the mountain.

Seventeen bodies were recovered on Mount Everest base camp and 61 people were injured when part of the base camp was engulfed by the snowslide, Ang Tshering Sherpa, president of the Nepal Mountaineering Association, said.

Two light helicopters shuttled the injured from base camp to a lower altitude, from where they could be evacuated back to the capital, emergency officials at Kathmandu airport said.

Another 100 climbers higher up Everest at camps 1 and 2, were safe but their way back down the mountain was blocked by damage to the treacherous Khumbu icefalls, scene of an avalanche that killed 16 climbers last year. Helicopters had started to shuttle them to base camp, Gavan reported.

The quake was the biggest to hit the Himalayan nation since 1934, which was the worst ever, killing some 8,500 people.

Neighbouring India, where 49 people were reported killed in the quake and its aftershocks, said it had dispatched 285 members of its National Disaster Response Force.

In Tibet, the death toll climbed to 17, according to a tweet from China’s state news agency, Xinhua.