Dozens dead in bombing of mosque in Pakistan 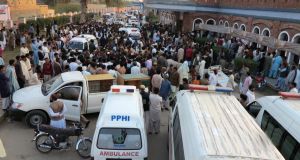 People and relatives of victims who were injured in a suicide attack gather at a hospital in Shikarpur, Pakistan. Photograph: Waqar Hussein/EPA

An explosion ripped through a Shia mosque in southern Pakistan during weekly prayers yesterday, killing more than 40 people and wounding at least 50 in an apparent suicide attack, hospital officials said. The bombing, in Shikarpur, about 480km north of Karachi, was the country’s worst sectarian attack in months.

Television images from the scene showed bloodied worshippers being carried from the mosque in the city’s Lakhi Dar district. The attack appeared to have been carried out by a suicide bomber, said Abdul Quddus, a police officer in Shikarpur. Jundullah, a splinter group of the Pakistani Taliban, claimed responsibility for the attack.

“Our target was the Shiite [Shia] community,” Fahad Marwat, a spokesman for the group, told Reuters. “They are our enemies.”

Such attacks have been relatively rare in Sindh, which has a tradition of tolerance among religious groups. But that harmony has come under threat with a recent expansion of sectarian groups.

“It seems like the killing of Shiites [Shias] makes no difference to them,” said Ali Hussain Naqvi, of Majlis Wahdat-al-Muslimeen, a Shia political party that held street protests across the province after the bombing.

One factor behind the killings may be the proximity of Karachi, where Shias have come under repeated attack in recent years. The bombing coincided with a visit to the city by prime minister Nawaz Sharif in an attempt to resolve the turbulent political and security situation there.

“Pakistan is fighting a decisive war,” Mr Sharif told reporters during a visit to Karachi stock exchange, “and we are now seeing the results.”

Mr Sharif said that military courts recently approved by parliament, which will allow the army to try suspects accused of being Taliban, would begin operating in the coming days. – (New York Times service)