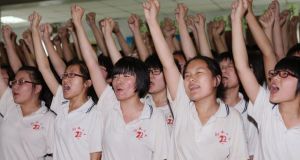 Students cheer during a morale-building event ahead of the upcoming national college entrance examination at Hengshui No 2 High School in Hebei province. Photograph: Reuters

As Irish Leaving Cert students take a breather today, they might spare a thought for the 9.4 million Chinese high-school students sitting college entrance exams, known as “gao kao”, this weekend.

In a country steeped in the tradition of educationalist and philosopher Confucius, it’s impossible to overstate the importance of these exams. Education is the most prized of assets, and getting into one of China’s top universities is a national obsession.

The one-child policy means many candidates bear the burden of expectation of an entire family: parents, aunts, uncles, grandparents and cousins. They are needed to get into Tsinghua or Peking University in Beijing or Fudan in Shanghai to secure the family’s future.

But the falling birth rate has also lessened the difficulty of getting into second-tier city colleges and there are growing numbers of students opting to study overseas.

It remains though a fraught time. The country stays respectfully silent, flights are re-routed, and people banned from honking car horns near exam rooms.

Beforehand, many families book hotel rooms near exame centres so their children can study and rest. Anxious parents wait outside, many having spent weeks making offerings at temples to ensure success.

Within the halls themselves, monitors are not allowed to wear high heels or perfume for fear of distracting the students.

There is also a spike in the sale of pricey food supplements to aid concentration, while many parents opt to send their children to an oxygen chamber to help them think more clearly.

“The pressure of college entrance examination is big for me, so I prefer to relax here. When I take the oxygen, I can read books at the same time. I feel fresh after the process,” said one Shanghai student from a tent.

There are free taxi services for candidates in some cities, and special traffic lanes for vehicles bringing them to the gao kao.

In Beijing, all leave is cancelled for thousands of traffic cops who are positioned to maintain order and ensure students get to their exams on time.

Chinese teacher Liu Yanhua, who compiled the exames, was taken to a mountain retreat, and kept in isolation behind an electrified fence. There was strict security outside the centre where she worked, no electronic devices were allowed and visitors were frisked for any written material.

On a lighter note, the leading cast members of the blockbuster movie Transformers: Age of Extinction – Irish actor Jack Raynor among them – posted videos online wishing the candidates luck in their exams. It was an inspired piece of marketing for the film which opens here on June 27th.