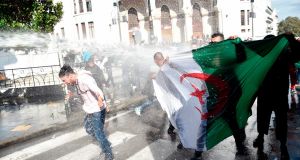 Algeria’s interim president was immediately rejected by thousands of protesters on Tuesday after he was named by parliament to take charge during a volatile transition period after decades of autocratic rule.

Replacing long-serving leader Abdelaziz Bouteflika, who resigned last week, Abdelkader Bensalah is seen by protesters part of an ailing and out-of-touch ruling caste that has dominated since independence from France in 1962.

A long-time Bouteflika ally, Mr Bensalah has been re-elected as leader of the upper house since the early 2000s. “Appointing Bensalah will fuel anger and it could radicalise the protesters,” said taxi driver Hassen Rahmine as crowds gathered in central Algiers.

At one point, police briefly turned water cannon to disperse protesters. Mass protests have led to the disintegration of what has been described as the ruling elite’s “fortress” – veterans of the war of independence against France, ruling party figures, businessmen, the army and labour unions.

But Algerians have been pushing for more radical change since Mr Bouteflika’s allies abandoned him in the weeks leading up to his resignation last week.

They are unwilling to compromise in their demand for a new generation of leaders in the North African country, which has failed to create jobs and improve living standards despite vast oil and natural gas resources.

“You go means you go,” read banners at the protest in central Algiers, which ended in the late afternoon.

The critical question is how Algeria’s military – long seen as a highly effective backstage player in politics – will react to Mr Bensalah’s appointment and any opposition that arises. “I thank the army and all security services for their work,” Mr Bensalah told parliament after his appointment.

Army chief of staff Lieut Gen Gaid Salah carefully managed Mr Bouteflika’s exit after declaring him unfit to stay in power and expressed support for protesters, who have put up little resistance to the military.

Hours after parliament made its choice, Gen Salah said the military would do more to ensure peace for the Algerian people, the state news agency APS reported.

“All in all, the way in which the vacancy of the presidency of the Republic has been filled does not bring our country closer to the end of the crisis,” said Ali Benflis, leader of the opposition Talae El Houriyet party.

On stepping down, Mr Bouteflika promised that elections would be held after 90 days as part of a transition to usher in a new era. According to the Algerian constitution, Mr Bensalah will remain interim president until new elections are held.

“We must work to allow the Algerian people to elect their president as soon as possible,” Mr Bensalah told parliament.

Out of a total of 604 MPS, only 470 lawmakers attended Tuesday’s meeting. “By maintaining the old guard like Bensalah, the system will be responsible for any bad consequences. We will not give in,” said student protester Djilali Chemime (27). – Reuters

1 Ireland among countries urged to consider reinstating restrictions
2 Coronavirus: Non-essential travel from US set to be banned within days
3 Sinn Féin apologises as member resigns over social media abuse
4 Coronavirus: No further deaths and 57 confirmed cases reported in State
5 ‘We can be fined how much?’ Shoppers mask up in Dublin city centre
Real news has value SUBSCRIBE