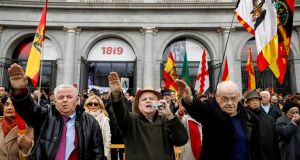 Leftist political parties in Spain are preparing a battery of measures aimed at dismantling the legacy of the dictator Francisco Franco, as controversy over the planned exhumation of his body rages.

The Unidos Podemos coalition has drawn up about 60 amendments to the 2007 historical memory law, including the proposed creation of a special prosecutor to pursue human rights crimes committed by the regime of Franco, who died in 1975. An amnesty law currently prevents such legal action from being taken.

The coalition also calls for the dismantling of the 150m-tall stone cross at the site of Franco’s mausoleum, known as the Valley of the Fallen, which is in the mountains near Madrid.

Unidos Podemos is expected to present the amendments formally in the coming days.

Valley of the Fallen

The initiative comes as the Socialist government continues efforts to dig up Franco’s remains from the Valley of the Fallen and bury them somewhere less divisive. The Spanish parliament has approved a motion paving the way for the exhumation but the grandchildren of the dictator want the reburial to take place in La Almudena cathedral in Madrid, where they own a plot. The government fears that this would make the cathedral, in the city’s centre, into a pilgrimage site for the far-right.

Tuesday is the 43rd anniversary of Franco’s death and the exhumation process has put the dictator’s legacy under renewed scrutiny.

On Sunday, three semi-naked women from the feminist group Femen interrupted a demonstration near the cathedral by several dozen Franco supporters who were marking the anniversary and voicing opposition to the exhumation. Some demonstrators punched and kicked the Femen members, who had “Legal fascism, national disgrace” written on their bare torsos, as police took them away.

Last month, the artist Enrique Tenreiro painted a red dove on Franco’s tomb, which sits next to the main altar in the basilica at the Valley of the Fallen, in an apparent act of protest.

Both Unidos Podemos and the Socialist Party plan to present legal amendments that would prevent Franco being reburied in la Almudena cathedral. Unidos Podemos also wants to exhume from the Valley of the Fallen the body of José Antonio Primo de Rivera, the leader of the far-right Falange party who was killed at the beginning of the civil war in 1936, as well as withdrawing nobility titles awarded by Franco.

Despite the legal difficulties surrounding the Franco exhumation, the government says the process will be completed by the end of the year.

Anti-fascist and historical memory campaigners have organised a series of events this week to coincide with the anniversary of Franco’s death. Meanwhile, the Francisco Franco Foundation, which promotes and glorifies the late leader’s memory, has said that Catholic Mass will be held in about 20 churches across the country this week to pray “for the soul” of the dictator.