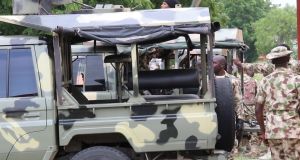 The Nigerian military has forced international non-governmental organisation Action Against Hunger to stop providing aid in northeast Nigeria, accusing it of supplying Islamic insurgents with drugs and food.

In a press release, a military spokesman said he had “observed with utter disappointment and concern the notorious activities of some NGOs working in the northeast”.

“Subversive” actions by Action Against Hunger persisted “despite several warnings to desist from aiding and abetting terrorists and their atrocities”, the spokesman said.

His statement said the allegations came from “credible intelligence”, and that the military “wishes to assure the public of its resolve and determination to always partner with credible NGOs and civil society organisations to cushion the impact of [the] humanitarian crisis generated by the criminals in the northeast, in line with the international best standards”.

In its own statement released on Thursday, Action Against Hunger said the decision to close its operations came “without notice and without any explanation”.

The organisation said it delivers “neutral, impartial and independent humanitarian aid to millions of people in Borno State by providing basic services to the most vulnerable, especially women and children”.

Millions of people have been displaced and tens of thousands killed and abducted during a decade-long insurgency in northeast Nigeria, which has seen Islamic militants attempting to carve out a caliphate.

In July, six of Action Against Hunger’s aid workers there were kidnapped. A video released afterwards showed the one woman and five men sitting together, with the woman appealing for help.

Speaking to The Irish Times, an aid worker for another organisation in northeast Nigeria said the news of the latest shutdown is “devastating” for the humanitarian community.

“This really underscores the challenges that we all face working in the northeast and comes at a time when the military are imposing more and more restrictions on the work that we do,” said the aid worker, who spoke on condition of anonymity because of a fear of repercussions.

The aid worker said this is part of a broader attempt to shut down NGOs and stop humanitarian work in the region.

“Any humanitarian assistance going to non-government-controlled areas in [the military’s] eyes is just aiding the enemy and prolonging the war,” the aid worker said.

In December 2018, the Nigerian military briefly suspended the United Nations Children’s Fund (Unicef) from operating, accusing the agency of “train(ing) and deploy(ing) spies who support the insurgents and their sympathizers”.

These were “unwholesome practices that could further jeopardise the fight against terrorism and insurgency”, the military said, though the suspension was quickly reversed, following emergency talks.

In mid-2017, a UN compound in Maiduguri was raided, with the Nigerian military saying it was searching for Boko Haram members.