Mandela ‘was the best of our values’, Mary Robinson says

Books of condolence open in Dublin, Limerick and Galway as Irish tributes pour in 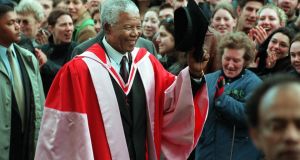 Nelson Mandela pictured at Trinity College Dublin in 2000 where he was conferred with a honorary degree. Photograph: Eric Luke/The Irish Times

Books of condolence have opened for the Irish public to pay tribute to Nelson Mandela as many Irish public figures remember the former South African president.

Former president Mary Robinson has paid tribute to a man who “lived the values he talked about.”

“Why are we so bereft? Because he was the best of us, the best of our values,” she said on the death of former South African president Nelson Mandela .

“As we mourn the passing of this extraordinary man, and young people around the world feel a particular sense of loss, we can honour him best by giving of ourselves to others,” Ms Robinson said in a statement.

She recalled his message on the first meeting of the Elders, a group of prominent figures set up to address some of the world’s most intractable problems. “He told us to be independent, to speak out against injustice. But also to be humble and to listen. He said those in places you go to will know more than you do..... reach out to those who are marginalised,” she told RTÉ’s Morning Ireland.

The flag is flying at half mast on Leinster House, the Mansion House, City Hall and Civic Offices in honour of Mandela.

A book of condolence for Mandela has opened at the Mansion House in Dublin today. It will be open all weekend from 10am until 5pm. On Monday it will be moved to and opened at the at the South African Ambassador’s Residence Ballsbridge until Friday.

St Patrick’s Cathedral, Dublin will open a book of condolence for Mandela tomorrow. to allow the public to pay tribute until December 14th

Nobel Laureate and former SDLP leader John Hume said Mr Mandela was a global beacon for forgiveness and reconciliation. “He not only stood against the injustice and inequality of apartheid, but rose above it and overcame it, leading his nation and his people on the road to freedom,” he said.

“Nelson Mandela was a strong supporter of the Irish peace process and the Good Friday Agreement, consistently promoting the need for inclusive dialogue, consultation and negotiation as opposed to confrontation and conflict.

“My thoughts and prayers are with Mr Mandela’s family and the people of South Africa as they mourn the loss of an inspirational and courageous leader and a true peacemaker.”

General secretary of the Irish Congress of Trade Unions David Begg expressed “deep sadness”today. He extended condolences to the South African Trade Union movement which “played a pivotal role in the long fight to end apartheid” and “highlighted the importance of the core trade union value of solidarity as exemplified by the Dunnes workers”

Writing in today’s Irish Times musician Bob Geldof said. “History stops, kneels and bows its head. His like is rare in all of human history.” “What a man. I knew him. We all did. How lucky we are that there was such a man”.

In an article for Time.com today musician Bono writes that Mandela has been a “forceful presence “in his life since 1979.

He has “been a big part of the Irish consciousness even longer than that,” he wrote because Irish people “ elated all too easily to the subjugation of ethnic majorities. From our point of view, the question as to how bloody South Africa would have to get on its long road to freedom was not abstract.”

Sinn Féin leader Gerry Adams has said “there was a slippage in the heart” when news of Nelson Mandela’s death emerged last night.

Mr Adams said Mr Mandela “led by example” when he was “demonised” as a criminal and a terrorist, and described the former South African president as a personal hero. “One of the very first political demonstrations I attended was here in Dublin, it was an anti-apartheid demonstration and it was my great privilege later to meet Nelson Mandela on quite a few occasions,” Mr Adams said.

“When he reached out to Sinn Féin in the ’90s, it was resisted stridently by the British establishment and by sections of the media.

“He and the ANC were a great help in the peace process, he understood many of the turns and twists.”

For republicans, Mr Adams said “it was a comfort to know others had prevailed” when faced with opposition from elements like the British government under Margaret Thatcher.

Tánaiste Eamon Gilmore said : “Nelson Mandela had a truly global presence. We all feel part of his extended worldwide family, sharing in the sadness at his death and the celebration of his life”.

The one-time Irish Anti-Apartheid Movement expressed sadness at the death of Mr Mandela. The group, which disbanded in 1994 after 30 years, described him as “the greatest man of the 20th century”.

“Sufficient for us to say that his incorruptible integrity, his humanity and his generosity of mind and spirit were always the lodestar in light of which we strove to run the movement,” it said in a statement.

Oxfam Ireland chief executive honoured Mandela “not only for his vision, courage and sacrifices for the liberation of South Africa but for promoting forgiveness and reconciliation following the end of apartheid.”