Mandela in 'critical but stable' condition 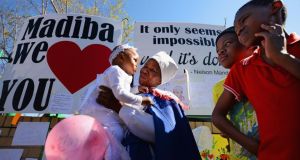 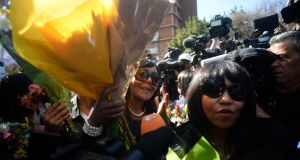 The statement followed a visit by president Jacob Zuma - his second in the past 24 hours - to the 94-year-old anti-apartheid hero in a Pretoria hospital, where he is being treated for a lung infection.

One of Mr Mandela’s daughters says he is in very critical condition but is still opening his eyes and reacting to touch.

Makaziwe Mandela told South Africa’s state broadcaster that the former president and anti-apartheid leader is still giving the family hope, even though “anything is imminent.” She says her family will wait with him until “the time to go.”

Meanwhile on his visit to Africa Barack Obama said Mr Mandela is a hero for the world and his legacy will linger through the ages.

Mr Obama said Mr Mandela had been an inspiration to him. He said that his story of imprisonment and emergence as an iconic figure of reconciliation gave him a sense of what is possible when “righteous people, people of good will work together for a larger cause.” He called Mr Mandela a personal hero.

Mr Obama spoke during a press conference in Dakar with Senegalese President Macky Sall. He was scheduled to travel to South Africa later today.

South Africans are preparing to say farewell to ailing Mr Mandela after his deteriorated condition forced president Jacob Zuma to cancel a trip to neighbouring Mozambique.

Earlier today the presidency said his condition had gone down in the past 48 hours. A spokesman for the presidency declined to comment on media reports that he was on life support in the Pretoria hospital where he is being treated for a lung infection, saying his privacy should be respected.

Mr Mandela has already spent 20 days in the hospital, his fourth hospitalisation in six months.

This has forced a growing realisation among South Africans that the man regarded as the father of their post-apartheid “Rainbow Nation” will not be among them for ever.

“Mandela is very old and at that age, life is not good. I just pray that God takes him this time. He must go. He must rest,” said Ida Mashego, a 60-year-old office cleaner in Johannesburg’s Sandton financial district.

Mr Mandela, South Africa’s first black president, is admired around the world as a symbol of resistance to injustice for the way he opposed his country’s apartheid system, spending 27 years in jail, more than half of them on notorious Robben Island.

He is also respected for the way he preached reconciliation after the 1994 transition to multi-racial democracy following three centuries of white domination.

Well-wishers’ messages, bouquets and stuffed animals have piled up outside Mr Mandela’s Johannesburg home and the wall of the hospital compound where he is being treated in the capital.

As they headed to work on today, South Africans seemed resigned to the prospect of losing their hero.

“We are all going to feel bad when he passes, but at the same time we will be celebrating his life. He has done so many great things for this country,” said John Ndlovu, a 25-year-old office worker.

Mr Mandela stepped down in 1999 after one five-year term in office.

Since then he has played little role in public life, dividing his time in retirement between his home in the wealthy Johannesburg suburb of Houghton and Qunu, the village in the impoverished Eastern Cape province where he was born.

The public’s last glimpse of him was a brief clip aired by state television in April during a visit to his home by Zuma and other senior officials from the ruling African National Congress.

At the time, the 101-year-old liberation movement assured the public Mandela was “in good shape”, although the footage showed a thin and frail old man sitting expressionless in an armchair.

1 Donegal to move to Level 3 Covid-19 restrictions, Taoiseach confirms
2 Covid-19: Three more deaths and 324 new cases in State as ‘green list’ of countries reduced
3 Next 10 days critical in fight against Covid-19 in Cork, says advisor
4 People leaving Catholic church because they are tired of ‘little old men’ - McAleese
5 Covid-19 Q&A: How are we doing now and is there any good news?
Real news has value SUBSCRIBE