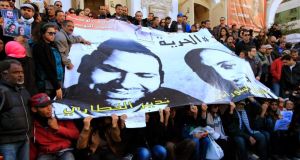 People pose around a poster of journalists Nadhir Ktari (left) and Sofiane Chourabi, who went missing in Libya in September, during a demonstration over their disappearance, in Tunis on January 9th. Photograph: Anis Mili/Reuters

Libyan militants calling themselves part of the Islamic State have saidthat they were holding captive 21 Egyptian Christians, raising new fears about the extremist group’s spreading influence beyond the battlegrounds of Syria and Iraq.

“Urgent - Soldiers of the Islamic State captured 21 Christian Crusaders in various areas of Tripoli province,” declared a caption below three photographs of the hostages posted by the militants and first reported by the Site Intelligence Group.

Last month, the same Islamic State outfit claimed responsibility for bombing an empty Foreign Ministry building in Tripoli in retaliation for a public wishing of “Merry Christmas” by a ministry official. The statement came on the same day that hackers linking themselves to the Islamic State temporarily seized control of the Twitter account of the US military’s Central Command, and just days after the emergence of a video-recorded vow of allegiance to the group by one of the perpetrators of last week’s terrorist attacks in Paris.

There are now Islamic State affiliates in each of Libya’s three provinces. The group claiming to have seized the hostages identified itself as the Tripolitania province of the Islamic State, named for the region around the capital, Tripoli, in western Libya.

The Egyptian foreign ministry confirmed that 20 Egyptians had been abducted in the mid-coastal city of Sirte, in Tripolitania province. All migrant workers, the Egyptians were seized at different times in two groups.

The Associated Press news agency reported on Monday that friends of the missing confirmed the authenticity of the photographs.

Sirte has been under the control of Islamist militants for at least several months. The city was a hometown to former Libyan ruler Muammar Gadafy, and he fled there for his last stand in autumn 2011. One of the rebel groups that conquered the city ultimately evolved into the extremist group Ansar al-Sharia of Sirte and came to dominate the city.

The captives, as both Christians and Egyptians, were doubly vulnerable. In addition to the sectarian animosity many Muslim extremists feel toward Christians, Libya’s Islamist militias and their allies are currently battling a rival coalition backed in part by the government of Egypt, across the eastern border.

Many Egyptians have long sought work in Libya, their oil-rich neighbour. A spokesman for the Egyptian foreign ministry, Badr Abdelatty, said that the government was exploring all channels to retrieve the captive workers. Each of Libya’s two militia factions is aligned with a rival government.

The Islamist militias and their allies, including the powerful militia from the city of Misrata, recognise a rump parliament and government in Tripoli. Egypt, however, has thrown its support behind the other internationally recognised government, headquartered in the eastern city of Tobruk. It is allied with Gen. Khalifa Hifter, who previously sought to dissolve parliament and lead a military coup.