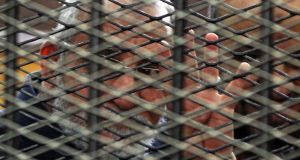 An Egyptian court has sentenced Mohamed Badie, the leader of the outlawed Muslim Brotherhood, and 13 other senior members of the group to death for inciting chaos and violence, a judge said in a televised session.

The court also sentenced US-Egyptian citizen Mohamed Soltan to life in jail for supporting the group and transmitting false news. He is the son of Brotherhood preacher Salah Soltan, who was among those sentenced to death on Saturday.

The sentences can be appealed before Egypt’s highest civilian court in a process that could take years to reach a final verdict. The men were among thousands detained after the ousting of Islamist President Mohamed Mursi in 2013.

Irishman Ibrahim Halawa, a 19-year-old from Tallaght, Co Dublin, is among those charged with murder, attempted murder and participating in an illegal protest. In March, his trial in Egypt was adjourned to April 26th.

Mr Halawa was arrested along with three of his sisters on August 17th, 2013, and has been in custody since. His three sisters were subsequently released and have campaigned for his release.

The Brotherhood says it is committed to peaceful activism and had nothing to do with recent Islamist militant violence in the country.