Climate change is hot topic for Africa as temperatures rise 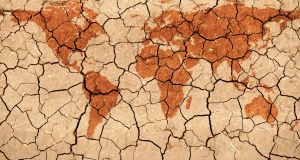 According to crop modelling, which helps to estimate yields when certain weather and soil conditions are applied, drought will decimate staple foods under a low mitigation future, especially important ones such as maize

When world leaders begin negotiating a new climate deal in Paris at the end of the month, a new study showing Africa’s temperatures have risen at twice the global rate ought to be crucial to their deliberations.

Released in September bySouth Africa’s Council for Scientific and Industrial Research (CSIR), the findings from the computer-generated climate modelling of the continent’s weather data from 1961 to 2010 provide a stark warning of Africa’s future if the right deal is not struck.

Last month, Laurence Tubiana, the main French negotiator for the United Nations Climate Change Conference (COP21), told The Irish Times there was a 70 per cent chance of a successful outcome at the global summit.

Tubiana is head of the general secretariat for the conference, which hopes to get commitments from more than 190 countries to keep global warming below 2 degrees.

However, the predictions in the CSIR paper entitled Projections of Rapidly Rising Surface Temperatures over Africa under Low Mitigation, suggest such a target would not save Africa’s tropics and subtropics from the ravages of climate change.

“In our modelling we look at the evidence and temperatures over the last five decades and it shows that climate change is already taking place in Africa at a rapid rate compared to the global rate,” he says.

Englebrecht also says data analysed by his team show Africa’s subtropics’ temperatures are rising by at least 2 degrees per century over the review period when globally surface temperatures increased at a rate of up to 1 degree per century.

The African subtropics are warming up more quickly than everywhere else because of how climate change interacts with the region’s semi-permanent high pressure weather systems, Englebrecht says.

“When increased climate change is added to this type of weather pattern, the effect is that cloud-making is suppressed. This reduction in cloud cover over the land means more sunlight is reaching the surface area and drastically increasing its temperature,” he says.

The impact of such increases on the agricultural and biodiversity sectors would be significant, says Englebrecht, and they will stem from extreme events such as heat waves, wild fires and drought.

According to crop modelling, which helps to estimate yields when certain weather and soil conditions are applied, drought will decimate staple foods under a low mitigation future, especially important ones such as maize, which are needed for food security.

Tens of millions of subsistence farmers in Africa rely on rain-fed maize production for their living as well as personal consumption.

The burning of biomass is also a very important factor in climate change, says Englebrecht, in terms of how increased volumes of CO2 affect the local environment in addition to increasing greenhouse gas levels in the atmosphere.

“Wild fires release CO2 into the atmosphere and trees thrive on this gas much more than grass does. So in the savannah trees are getting the upper hand at the expense of grassland, which adversely affects agricultural animals’ and wildlife’s grazing potential,” he says.

Englebrecht and his co-authors also say in their paper that general reductions in soil moisture across the continent as a result of the increased levels of evaporation that occurs in response to rising surface temperatures is a plausible reality in the future.

“In the subtropics, this effectively implies a longer burning season and a shorter growing season,” he says.

If world leaders fail to secure a legally binding framework and emissions agreement in Paris that fully responds to Africa’s more precarious position when it comes to rising temperatures, the continent’s future looks bleak.

“The decisions we make now will determine our energy future,” says Englebrecht. “They will lock us into a certain type of climate future for the next century or more.”