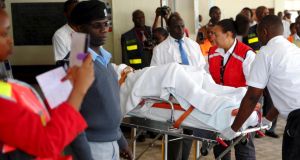 A man injured during an attack on a residential complex in Soko Mbuzi village of Mandera town at the Kenya-Somalia border is wheeled on a stretcher as he arrives at the Kenyatta National Hospital in Kenya’s capital Nairobi. Photograph: Reuters

Many died in their sleep, the Kenya Red Cross said. The raid, in the town of Mandera, mirrored one in the same county in December in which 36 quarry workers died.

Al Shabaab has made a series of deadly incursions into Kenya, which it says will continue until Nairobi withdraws its troops from an African Union force fighting the militants in their home base of Somalia.

The group’s military operations spokesman, Sheikh Abdiasis Abu Musab, told Reuters its gunmen killed more than 10 Kenyan Christians in Tuesday’s raid. It has in the past singled out non-Muslims to be executed.

“The area ... is a plot where quarry workers live. They attacked at around 1 am Most of those killed are workers from upcountry,” Alex Nkoyo, commissioner for Mandera County, he told Reuters by phone. He put the death toll at 14.

Among the dead was a woman who had tried to plead with the gunmen before being shot, he said.

Abbas Gullet, the secretary general of Kenya Red Cross, said the workers were attacked as they slept, and that at least 11 people were wounded.

Tuesday’s raid will heighten pressure on president Uhuru Kenyatta to beef up security in response to al Shabaab attacks, the worst of which killed 148 people at a university in eastern Kenya’s Garissa County in April.

“This attack is a clear reminder that al Shabaab and its collaborators are determined to disrupt and subvert our way of life,” interior minister Joseph Nkaisserry said in a statement.

He said security reacted swiftly to prevent a higher death toll after the group opened their attack by blowing up an entrance gate to the residential area.

After the Garissa attack, critics accused the security forces of responding too slowly, one reason cited for the number killed in that attack.

Kenya’s northeast border with Somalia is widely considered a security weak spot, given the challenge of policing such a long frontier, poor coordination between security services, and a culture of corruption that allows anyone prepared to pay a bribe to pass unchallenged.

Al Shabaab aims to topple Somalia’s Western-backed government and wants to impose its own strict version of Islamic law on the country.