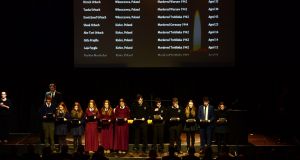 Parallels can be drawn between European states’ failure to offer sanctuary to Jews during the Holocaust and the refugee crisis facing the continent today, Taoiseach Enda Kenny has suggested.

Speaking at the Holocaust Memorial Day ceremony in Dublin yesterday, Mr Kenny said it was good for Europe to remember those who died at Auschwitz-Birkenau, “particularly in the current refugee crisis”.

He recalled that in 1938, Ireland and 26 other states gathered at the Évian conference to consider the plight of Jewish refugees fleeing persecution by Nazi Germany, but that Europe “closed its borders to the men, women and children facing them”.

“Today with the refugee crisis from Syria, the men, women and children are from another faith, but Europe shares with them something so profound, both estimable and inestimable: our common humanity. If we keep our focus on that, there can be no ‘them’, only ‘us’,” Mr Kenny said.

“I am struck by how for each of them they don’t as much tell their story, as relive it. And we are privileged to be in their presence,” he said.

Mr Reichental, who was born in Slovakia in 1935, told the audience of his capture by the Nazis as a nine-year-old. He and his family were herded into a cattle car and “treated like animals” until, seven days later, the doors opened and they were faced with shouting SS men and barking Alsatians.

At Bergen-Belsen camp, he watched people die of disease and the cold in horrific conditions. “Seventy-thousand prisoners of Bergen-Belsen are buried there in unmarked graves. I lost 35 members of my family in the Holocaust,” he said.

Mr Kaminski, who came to Ireland as a political refugee, had had his “entire family wiped out” in the Holocaust, his daughter Jadzia Kaminska recalled. In Bilgoraj, the town in southeastern Poland where he was born, no trace of his direct family has ever been found.

Candles were lit in memory of the six million Jews who were killed as well as all the other victims of the Nazis and their collaborators.