State agency apologises for lapses in support for vulnerable teen 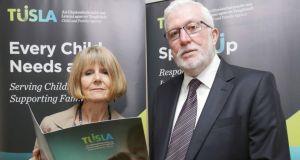 Chairwoman of the National Review Panel Dr Helen Buckley with Paul Harrison at the launch of the report. Photograph: Laura Hutton/Photocall Ireland

The Child and Family Agency has apologised for failing to meet the needs of a vulnerable teenager in State care, who died despite being in desperate need of support throughout his life.

Four reports were published yesterday into the deaths of young people who were either in State care or known to social services.

One of cases involved Danny Talbot, who died in 2009 at the age of 19 following a drugs overdose while in State aftercare services.

The report reveals critical failings in mental health services, unacceptable gaps in record-keeping and poor frontline social work practice over the course of most of his life.

There were also serious weaknesses in the management and accountability within the HSE relating to his case, according to the report. ‘Shortcomings’ Paul Harrison, director of policy and strategy at the Child and Family Agency, acknowledged “considerable shortcomings” in State support available to the young man.

“Whilst acknowledging the considerable service pressures on social work staff at the time, the statutory intervention provided to a young person at high risk was insufficient and poorly co-ordinated,” he said. “The necessary State support did not happen and we must acknowledge this and apologise.”

Mr Talbot’s aunt, Donna Lamb, said she feared many other vulnerable teens were still at risk, despite claims that the service had improved over recent years.

“We see them all the time and we get calls from families who are still being ignored by the care system,” Ms Lamb said. “Danny fell through the cracks in the system. He’s dead now, but other children will continue to die until there is some accountability for the service.” Radical changes Mr Harrison said there had been “radical changes” to the way social services responded to vulnerable young people since these tragic deaths in recent years.

They include the establishment of the Child and Family Agency, which has taken over responsibility for child protection services from the HSE.

He also pointed to the development of new protocols, assessment frameworks and other reforms aimed at securing greater co-ordination and accountability for services.

However, the chairwoman of an independent review team which examined the deaths expressed concern yesterday at staffing vacancies and delays responding to reports of abuse and neglect.

Dr Helen Buckley said while there had been welcome reforms to the way child protection services were organised, there also needed to be investment in training and staffing of frontline services.

The agency has confirmed there are more than 160 vacant positions across the services – including more than 80 social work posts – and as many as 9,000 reports on alleged neglect or abuse that are waiting to be allocated at any one time.

When asked if a case like Danny Talbot’s could occur again, Dr Buckley said it was impossible to rule out.

“I would never say never,” she said. “Pressure on the service means children who have low visibility – who are neglected, who are just under the radar – may not be getting the service they need, even though the structures of the agency have improved.”

FOUR DEATHS: How social services responded
Danny
Danny was born in 1989 and lived in a flat in Dublin with his father and brother. His mother did not live with them. By the time he was five, social services had been alerted to his emotional and behavioural difficulties.

The review team was unable to establish whether this was followed up because of an absence of records.

When his father died a few years later, Danny was placed in foster care. There is no evidence that the placement was assessed and approved by the health board at the time.

He ran away on several occasions and ended up accessing services for homeless boys. In this “out-of-hours” service – a form of hostel-type care for homeless young people – he drifted into crime, drugs and other risk-taking behaviour. In his late teens, his extended family sought to have him admitted to a special care unit for his own protection.

The requests met with “undue delays” and were refused. Danny died of a drug overdose when staying at a hostel in Dublin. Among the report’s findings are that there was an inadequate response to evidence he was experiencing abuse and neglect as a child.

NICHOLAS
Nicholas first came to the attention of child protection services at five years following concerns over neglect, parental conflict, maternal alcohol misuse and family homelessness. He and his father were placed in supported accommodation but he remained at risk as a result of poor school attendance, a disorganised home and drug misuse. He became a father in his mid-teens and, shortly afterwards, spent time in a high support unit for troubled teens.

Given the risks he faced, an application was made for him to be admitted into special care – a more secure form of residential care – but it was turned down. He was reluctant to engage with a range of services offered to him, the report states, and spent his final evening socialising with his friends.

Nicholas was found dead the next morning, at the age of 17, following a drug overdose.

The report says he was allowed to remain for too long in an environment where drug misuse was the norm and where his father could not meet his needs.

A decision to admit him into care should have occurred much earlier in his life, the report found, while services later provided to him could not compensate for the neglect he had experienced.

JOHN
John was diagnosed with a serious illness when he was three. His parents became very concerned about the effect the treatment had on their child. They withheld consent for the next phase of care, opting instead for complementary therapy.

Over the following months, John’s consultant and the medical social worker attached to his team met regularly with his parents to convince them of the importance of treatment. His case was referred to child protection services, which applied to the High Court for an order to resume treatment. Before it could resume, one of the parents removed him from the jurisdiction. His parent later brought him back and he died in a children’s hospital.

The review team found that neither the HSE nor the hospital staff could have done anything more in their power to prolong John’s life. It said social workers acted promptly and the childcare manager, in particular, made every effort to secure the best outcome for him.

Difficulties in the case were heightened as a result of a dispute between John’s parents and his medical team. Social workers worked hard to develop a respectful working relationship. “This is commendable, particularly given the legalistic turn taken in the case,” the report states.

SUSAN
Susan was 18 months old when she died after what was described as a tragic accident at home. She was taken into care after her mother apparently left her with a childminder and never returned. The child was considered to be at risk of harm due to neglect and was placed with foster carers under an emergency care order.

Social workers worked with her mother and husband over three months to assess their parenting capacity. Susan was returned to the parents on the basis that they were capable of caring for her and were willing to engage with support services. A family support worker was allocated to them, but a social worker was never assigned on the basis that it was a low priority.

The child was observed to be making good progress, although the mother disengaged from services and a community nursery organised for her daughter. No concerns were noted about Susan’s safety and welfare at the time and she died a few weeks later.

The report found that social services responded immediately and appropriately at the outset, although the relationship between mother and daughter required more in-depth assessment.

Social work practice was “well supported”, although the fact that the case remained on a waiting list should be seen in the context of a system overwhelmed by the volume of referrals.