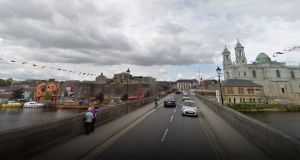 Midlands Simon, which runs a six-bed homeless shelter in Athlone (pictured), has already cut staffing and says it will likely have to close the facility unless it gets a “reasonable increase in funding”, according to its chief executive, Tony Riordain. File photograph: Google Street View

The only emergency shelter for homeless people in Co Westmeath, which also serves Laois, Longford and Offaly, faces closure because its costs can no longer be met.

Midlands Simon, which runs the six-bed shelter in Athlone, has already cut staffing and says it will likely have to close the facility unless it gets a “reasonable increase in funding”, according to its chief executive, Tony Riordain.

“We have to fundraise to make up the difference,” says Mr Riordain. “In this part of the country the recession hasn’t lifted in the way it has in Dublin. Fundraising is difficult.

There’s more of a stigma about being homeless in rural areas. These are smaller communities, where people recognise each other

“People give what they can, but it’s mostly shaking cans for coins. We have told the Department [of Housing] it’s not sustainable. We have resisted talking to the media, but the situation is serious.”

Homelessness is far less visible in regional towns than in larger towns and larger urban centres where people are commonly seen sleeping rough, said Mr Riordain, so the issue can be more easily ignored.

“There isn’t the same public pressure here to fund services like ours. But it is vital. Between our other services, in Counties Offaly, Laois and Longford, we are working with over 150 homeless people at any one time.

“Also there’s more of a stigma about being homeless in rural areas. These are smaller communities, where people recognise each other. Homeless people are less likely to speak out. ”

Homelessness among single adults has increased by 44 per cent in the Midlands in the year since October 2016 – from 54 to 78, while the number of homeless families has jumped from 13 to 24.

However, the region gets less than 0.5 per cent of the Department of Housing’s national homelessness budget. Of the €160.7 million allocated to homeless services this year, the Midlands region was allocated just €800,000.

Despite a six-month limit on how long people can stay at the Athlone emergency shelter, the lack of anywhere else to go means some are staying for as long as two years.

If it wasn’t for Simon, I’d have been found dead, I know that. This place saved me

Brian Fitzpatrick (55), originally from Killester, Dublin, has been in the Athlone facility since April, having become homeless following the death of his partner from breast cancer in 2010.

He left his job with An Post to care for her, and began drinking heavily after she died. He has been homeless in London, and more recently in Athlone – having lost his last home as he had been in hospital and fell behind with the rent.

Having slept for a number of weeks in a shed, he was offered a bed in the Athlone shelter. Describing himself as “content”, he said he is now completing a course run by the Merchants Quay voluntary drug groups.

“I have a roof over my head, and a warm bed. I’d like to get my own place. If it wasn’t for Simon, I’d have been found dead, I know that. This place saved me.” Now, however, he wishes to move on and get a job: “Athlone is a small place.”

The Department of Housing said the needs of regions are kept under review on an ongoing basis, adding it has made it clear it will help to meet the costs faced by housing bodies.