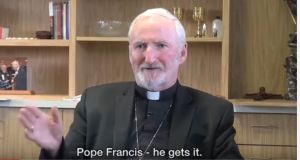 David O’Connell speaking in the original version of a video promoting the World Meeting of Families 2018.

Words of welcome from a bishop for gay people raising children and people in second marriages have been removed from a video promoting the World Meeting of Families 2018. The meeting takes place in Dublin in August and will probably include a visit by Pope Francis.

In the video,entitled Parish Conversations Session 1, David O’Connell, a Cork man and auxiliary bishop of Los Angeles, had said: “Pope Francis, he gets it. Today there are all sorts of configurations of families – mum and dad; mum or dad on their own; gay couple raising children; people in second marriages.”

However, a spokeswoman for the meeting has now said: “The wrong version of the video for Parish Session 1 was inadvertently uploaded for a short time but the correct version is now in place.” She said she was “looking into how this mistake happened”.

The video is part of the six-session Parish Conversations programme on the amoris.ie website, in which participants are assisted in reflecting on and sharing experiences of family life and their response to Pope Francis’s reflections in his 2016 encyclical Amoris laetitia (The Joy of Love).

The spokeswoman pointed to a video entitled Parish Conversations Session 5, where she said “the themes raised by Bishop O’Connell are dealt with more fully”.

The spokeswoman said: “It was the view of the programme producers that addressing these themes on the fifth night of the programme was more appropriate than on a first night for a parish group.”

She said that in the Session 5 video “we hear from a young gay woman; a mother of a gay son, and Bishop O’Connell talking about the [Catholic] Church’s approach to people in all of these situations, including people in second unions.

“There was no other reason for making this change than to deal with the important issues raised by Bishop O’Connell later in the programme in a fuller way.”

However, the words of Bishop O’Connell removed from the Session 1 video are not repeated by him in Session 5.

The spokeswoman noted how, in Amoris laetitia, “Pope Francis specifically stresses that ‘every person, regardless of sexual orientation, ought to be respected in his or her dignity and treated with consideration’ . . . as is repeated throughout the parish programme.

“The meeting has always been understood as a meeting open to all. This remains the position of the World Meeting of Families in Dublin.”

Meanwhile, a US-based fundamentalist Catholic website has said the Session 5 video “promotes the sin of homosexuality”.

The “pro-gay propaganda” in the video, it says, begins with a young gay woman who talks about coming out to her parents.

Church Militant is more critical of another woman in the video, Gemma, who talks about her gay son and how “really upset” she and other parents of gay children were at the Catholic Church’s use of words like “intrinsically evil” and “disordered” to describe their children’s sexuality.

In the video, she says “every child that’s born into this world comes with a God-given dignity” and that “nobody has the right to take that dignity from them”.

Church Militant said Gemma was “subtly endorsing homosexuality. The word ‘dignity’ is a buzzword for the LGBTQ community; in fact, ‘Dignity’ is also the name of a dissident ‘Catholic’ pro-gay organisation”.

It also noted how in the same video Bishop O’Connell said he tells families at Masses during the Thanksgiving, Christmas and Easter periods that he wants them to know “no matter what your situation is – if you’re divorced and remarried, if your family’s falling apart, if you’re alone trying to raise your children, if you’re [in] a second marriage – that Christmas is for you; above all others, Jesus came for you.”

Children who go abroad must self-isolate for 14 days before return to school in September 18:10
Coronavirus: One death, 25 new cases reported in State 18:11
Angry Taoiseach calls for resumption of work on new National Children’s Hospital 17:56
Man tried to steal cars while high on crack and holding chihuahua 17:51
Judge gives landlord a week to halt Covid-19 parties near UCC 17:32