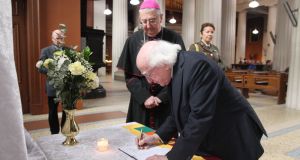 Archbishop Diarmuid Martin looks on as President Michael D Higgins signs a book of condolence for victims of the Sri Lanka bombings in the Pro-Cathedral. Photograph: John McElroy

A Mass for victims of last week’s bombings in Sri Lanka heard of the risk of “increased militarisation” in the country and of a “destructive narrative” that pits its Muslims and Christians against each other.

Speaking on Sunday at the Pro-Cathedral in Dublin, Dr Jude Lal Fernando of Trinity College Dublin said it was “highly distressing to hear that one of the main responses generated after the Easter Sunday killings in Sri Lanka leads us further to the path of death and destruction”.

Dr Lal Fernando, who is an assistant professor in the Irish School of Ecumenics, warned of calls for “greater security” in the aftermath of the bombings, which claimed more than 250 lives on Easter Sunday. “Further militarisation has been called for in a country where the density of soldiers to civilians is one of the highest in the world,” he told the congregation, which included President Michael D Higgins, and the Taoiseach’s Aide-de-Camp, Commandant Caroline Burke.

Shaykh Dr Umar Al-Qadri, chief Imam of the Islamic Centre of Ireland, was also at the cathedral to express his condolences and solidarity with the Christian community.

Dr Lal Fernando embraced Mr Higgins following his speech to the Mass, which was celebrated by Archbishop of Dublin Diarmuid Martin. The Sri Lankan honorary consul to Ireland, Darina Allen, was also in attendance. Dr Lal Fernando criticised the “mainly Sinhala Buddhist” Sri Lankan state, which he said “has violated every ethical principle in Buddhism, of course with the full support of the most powerful states on Earth”.

He warned of a “sinister agenda” and said that in the aftermath of the attacks, Muslim clerics have been prevented from attending funerals, and joint memorial ceremonies have been “strongly discouraged”. “Instead, retaliation has been encouraged under the deadliest narrative of Islam vs Christianity.

“Both Catholic and Protestant leaders have to listen to the security advice of the state that knows nothing but retaliation,” he said. He spoke of how his sister, who is a primary school teacher in Negombo, saw seven of her pupils killed in the attack, along with 18 of their family members.

When he spoke with his sister, he said she was “weeping inconsolably as she with her staff members, desperately attempted to identify the lifeless and disfigured bodies of her pupils”.

Speaking outside the Mass, Meril Fernando said “we are Christians, so we have to forgive, but we have to be vigilant, to protect Christians and the public”.

Ms Allen, who has served for several years as Sri Lanka’s honorary consul in Ireland, said she had no comment on the political elements of Dr Lal Fernando’s speech.