Rate of repossessions by mortgage lenders has doubled, says report 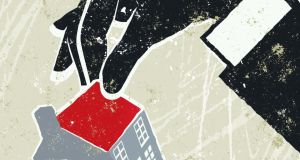 Evictions and repossessions: A pan-European research project headed up by NUIG academic Dr Pádraic McKenna found that most evictions carried out in Ireland are in the private housing sector, and the country is not monitoring and recording evictions in a systematic manner. Photograph: Getty

There was a doubling in the number of properties repossessed by mortgage lenders in Ireland between 2010 and 2013, new research has found.

A pan-European research project headed up by NUIG academic Dr Pádraic Kenna found that most evictions carried out in Ireland are in the private housing sector, and the country is not monitoring and recording evictions in a systematic manner.

The latter criticism is reflected across many EU states in the study which found that courts are failing to respect human rights in eviction cases throughout the continent.

It points to a particular problem with illegal evictions in Ireland, and although the authors identified 200 such cases in 2013 alone no convictions or criminal sanctions were brought against the perpetrators.

“There were relatively high numbers of evictions (including illegal evictions) in the [Irish] private rented sector,” reads one passage of the report.

“While there was a high level of initiated evictions in the social rented sector, the number of those actually evicted was very low. Nevertheless, there is great media and political interest in any evictions which take place due to the historical legacy of evictions.”

Evictions which take place outside judicially-supervised processes tend to disproportionately affect undocumented migrants and asylum seekers on the black rental market, it found.

Ireland was one of five EU member states where evictions increased by more than 10 per cent between 2010 and 2013, along with Bulgaria, Cyprus, Latvia and the Netherlands.

Whereas there was a 17.6 per cent increase in the number of evictions initiated by local authorities in Ireland during that period, the number of properties repossessed by regulated mortgage lenders increased by 111 per cent from 363 in 2010 to 766 in 2013.

Of the 766, over two-thirds were taken into possession by voluntary surrender and the rest were by court order.

The report entitled ‘Promoting protection of the right to housing- Homelessness prevention in the context of evictions’, was published on Thursday.