‘Sometimes we eat noodles for dinner, just to make the food last longer in the week’ 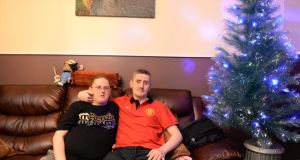 Jason O’Brien and his partner Audrey Murphy would be “lost” without the weekly free food parcels at the Capuchin Day Centre in Dublin.

“They’re great,” says O’Brien. “We go there and can get a parcel with tea bags, sugar, milk, butter, cheese, a tin of beans or soup and a sliced pan, or sometimes the roundy loafs – the soda bread – and that is fabulous.

“And you get packs of cooked chicken,” adds Murphy, “which is great for a stir-fry.”


City centre
Sitting in their flat in Oliver Bond House, just off the quays in Dublin’s city centre, the couple tell how their son Nathan (10) has gone to see a pantomime with his school.

Murphy, who has serious health issues, including a brain tumour and a cracked spine, receives a disability allowance of €188 per week, €20 a week fuel allowance, €124.80 dependent adult allowance for Mr O’Brien and €29.80 dependent child allowance for Nathan. Rent of €45.80 per week is subtracted, leaving them with €316.80.

“The gas and electricity is about €50 a week,” says O’Brien. She also takes 24 tablets a day and uses a range of morphine patches and gels. Her medical card covers most but she spends about €75 a month herself on items not covered. Murphy is due to go into hospital next month to have a brain tumour removed and has had to seek help from St Vincent de Paul to buy pyjamas.

They moved into the flat 18 months ago and borrowed from a money lender to buy a number of items including a television and furniture. They now have weekly repayments of about €110 a week.

“We have about €150 a week for everything else,” says Murphy.

“It is very stressful trying to make that last. Things come along that put the budget out, like last week I needed new glasses and they were €30.”

O’Brien tells of how he shops in Lidl, Aldi and Dunnes Stores seeking out the best value.

“Our young fella is a fussy eater. It’s hard to get him to eat vegetables, so we don’t buy them much, maybe peas or carrots. He has cereal, Rice Krispies and toast, for breakfast.”

He also gets a sandwich at lunch time in the school.

Asked about dinner, O’Brien says he makes “potatoes or chips or pasta”.

“There wouldn’t be meat every day because of the way things are. Sometimes we would eat noodles for dinner, just to make the food last longer in the week. My mother brings a dinner on Sundays so that helps too.”

Across the city in Ballyfermot, Christine Doyle, recently separated, also says if it weren’t for her mother, feeding her children would be “almost impossible” by the end of each week. The mother of four children, aged 20, 15, 8 and 7, is planning on going back to college but for now manages on “just over €270 a week”.

She pays €65 a week in rent and about €55 a week on electricity and gas, leaving her about €150 a week. “I cook a fresh meal every night, maybe a coddle or a stew. I find Lidl is the best value, especially for fruit. It’s better quality for the price than the likes of Tesco. ”


School meals
Her two youngest children also get free meals at their school on the days they have school.

“We go to my mother’s twice a week for dinner. I’d be lost if it wasn’t for her.”

Though both households would shy away from the label “food poverty”, both speak of the struggle making their food budget stretch through a week and of having to seek outside help.

There are, according to a report published yesterday by the Unite and Mandate trade unions, 112,300 people experiencing food poverty in the greater Dublin area. The Hungry for Action: Mapping Food Poverty in Ireland report says there are 50,500 people in food poverty in Co Cork and 25,300 in Co Galway.

The figures are drawn from 2010 data and, says the report, are “likely to be conservative”.

Food poverty has a long-lasting detrimental impact, particularly on children, say the unions.

They say it must be addressed immediately and are calling for an emergency subsidy of €10 million for charities providing food-relief, an increase on core social protection rates of €6 per week, an increase in the minimum wage from €8.65 to €9.20 an hour and the introduction of an EU directive guaranteeing part-time workers a minimum number of hours.