Dublin homeless may be housed in rural areas

Over 70 people are sleeping rough every night in Dublin City. These people make up just 2% of the total homeless figures for the city. Video Enda O'Dowd 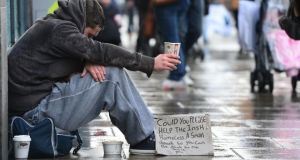 A scheme to relocate hundreds of homeless Dublin families to vacant homes around the country will be considered by Government in the autumn.

Work on a “rural relocation scheme” for homeless families is at an early stage, a spokesman for the Department of the Environment said yesterday but added it was one of a range of measures to tackle the spiralling homelessness crisis that would be discussed by the Cabinet Sub-Committee on Social Exclusion in coming weeks.

Discussions on how such a scheme would work are being led by the senior department officials, he said, and involved the City and County Managers Association, the HSE and Dublin City Council as the lead local authority coordinating homelessness services in the capital.

The current thinking is that the “choice-based lettings” system would be used to “advertise” vacant dwellings in rural areas to homeless families.

“Choice-based lettings” is a scheme used by local authorities to advertise council houses that are difficult to let, to households on the housing waiting list.

Interested households can then express an interest in a dwelling. It is seen as a way for households to “jump” the waiting list if they are willing to take a less desirable dwelling.

The department spokesman said: “That is how the choice- based system works at the moment. This will be examined to see how it might operate in the context of homeless persons.”

Numbers are also escalating in the commuter counties, as well as in the main urban areas of Cork, Galway and Limerick.

Speaking at an event in Dublin yesterday to mark the 30th anniversary of Focus Ireland, its founder, Sr Stanislaus Kennedy, said she had never seen as much homelessness in Ireland.

“It’s out of control and it’s an emergency now. Every day we’re seeing new families becoming homeless, and the numbers are increasing,” she said.

Detailed plans on how to help families affected by the housing crisis move from Dublin to rural Ireland, have been put to both the Department of the Environment and the Department of Agriculture by Rural Resettlement Ireland (RRI).

In a submission to the Department of Agriculture earlier this year RRI said: “The housing crisis in Dublin is well-documented, as is the abundance of available houses in the west/midlands and some other rural areas.”