Successful outcome for teen with ‘psychosis’, and no aftercare plan for 18-year-old girl 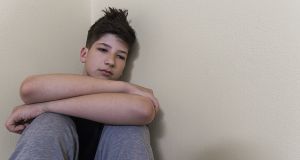 A teenager who suffered from “attenuated psychosis” and whose life was at risk had a “very successful outcome” after being sent to a therapeutic unit in the UK.

In 2014 he had left home due to alleged physical abuse. He went to live with his grandfather but in early 2015 the arrangement broke down. He was placed in residential care.

Problems arose due to his developing aggressive behaviour and multiple episodes of self-harm. After a suicide attempt, he was admitted to an adult psychiatric unit for 48 hours. He then waited 20 weeks before getting a secure-care placement. There he engaged in self-harm and property damage and also threatened others.

The director of the Central Mental Hospital, a consultant forensic psychiatrist, said the boy had an increased risk of severe mental illness in the next year, with typical progression to schizophrenia or bipolar disorder with a “high imminent risk of serious harm including death”.

He had made serious suicide attempts.

Four months after admission to a UK unit, he was “engaging at a meaningful level not done for a number of years and was in the best place ever regarding family relations”.

His return to Ireland when 18, to a privately funded adult psychiatric unit, was successful. Six weeks later, when the case returned to the minors’ review list, the Child and Family Agency said the youth’s social worker and guardian ad litem had visited him in his new accommodation, “where he had greeted them warmly and they had found his demeanour calm and bright”.

“He had told them how happy and grateful he was for everything that had been done and was insistent he wanted his appreciation mentioned to the judge.”

He spoke of future plans.

The judge terminated the proceedings. “Clearly it’s a success story,” she remarked. All parties agreed.

In November 2017 a judge was told a girl who had been in care since infancy and who would be 18 in two months, had no aftercare plan.

Hers was a “serious mental health case”, the High Court heard. She had been in a medium-secure psychiatric hospital in the UK for a number of months. The hospital said a “sensitive discharge” was required for her return to Ireland.

Two weeks later, though she was considered ready for discharge, no onward placement had been found in Ireland. Four weeks later, no aftercare plan had been made. The judge told the Child and Family Agency to have a plan within two weeks, noting aftercare was “imperative” for the girl.

The case returned in January 2018 and the agency said a placement had been identified the previous night. The judge said however it was “not sustainable” as she would have a long commute to her education placement. The judge said she wanted to know “adequate planning has been done”.

“It is an issue that arises every week in this court, particularly in light of new secure placements available and a lack of planning at the other end of it. Matters are to be dealt with on affidavit as to what is being done with the onward placement. In fact, the problem is even greater than before due to the new secure placements.”

In January 2018 the court heard the girl was in a placement and attending an education centre. The court asked the agency to ensure she had appropriate transport to the centre, which is some distance away.