‘The love in my heart is all that matters now. I am broken-hearted at having to say goodbye …’ 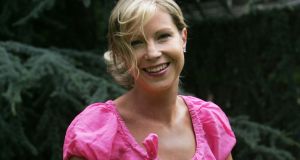 Bestselling author Emma Hannigan took to her official Facebook page on Friday and told fans her battle with cancer was coming to an end. File photograph: Cyril Byrne/ The Irish Times

Bestselling author Emma Hannigan who has fought cancer several times has been been told her illness is no longer treatable and she may not have long to live.

Ms Hannigan (45) took to her official Facebook page on Friday and told fans her battle with the illness was coming to an end.

“All good things must come to an end. The time that I knew was borrowed must be given back soon, so it seems,” she wrote.

“My medical team have thrown everything but the kitchen sink at this fight but all avenues have now been exhausted.”

She said she did not want to leave fans of her writing “out in the cold” as to what was happening with her health after a two week break from social media.

She explained that the love of her family, friends and fans have sustained her throughout her 11 years fighting the illness.

“To say that I am heartbroken doesn’t begin to cover it. But I feel I’d like to say something, after all that’s what I’ve done over the years - say stuff, write stuff and tell you what’s going down,” her post continued.

In 2006 she had a double mastectomy and her ovaries and fallopian tubes removed.

However, despite the preventative surgery, she was diagnosed with cancer again in 2007 and had been receiving treatment for cancer since.

Ms Hannigan paid tribute to her husband and children for their support and love throughout the years.

“Faced with very little time can I tell you what screams out at me? Love.

“Nothing else has much meaning anymore. Just the love I feel for the people I hold dear. My two babies (ok they both tower over me, but I’m still allowed call them my babies), my husband, my parents, my family, my friends and readers.

“Yes you guys (fans) are up there on the short list. You’ve been an integral part of my existence and have championed me and held me in your virtual arms.

“The love in my heart is all that matters now. I am broken-hearted at having to say goodbye so if it’s alright we’ll say farewell instead…”

Her many novels include Designer Genes, Miss Conceived, The Pink Ladies Club, Keeping Mum, Perfect Wives, Driving Home for Christmas, The Summer Guest, The Heart of Winter, The Secrets We Share and her memoir, Talk to the Headscarf. Her 13th and final novel Letters To My Daughter was published recently.