Women on the verge of important breakthroughs

Ahead of Ada Lovelace Day next Tuesday, which celebrates women in science, five Irish women talk about their work 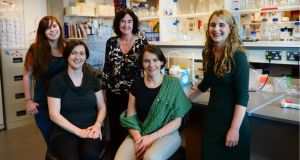 Ada Lovelace – few people know her name, but more should and soon will.

Women in science, technology, engineering and maths are beginning to talk about Ada Lovelace Day, October 15th, which is all about raising the profile of women involved in these subjects.

The 19th century wasn’t quite comfortable with women scientists, and she was considered unconventional. We still suffer from a hangover of these Victorian notions, with the result that women remain under-represented in the sciences. Ada Lovelace Day is intended to counter the perception that science is for boys.

So what does a career in science look like for women today? I spoke to five women at different stages of their careers.

Marina Lynch decided she would like to be a scientist at the age of 12. Now a professor of neuroscience in Trinity College Dublin and a member of the Royal Irish Academy, her career has been hugely successful, littered with important discoveries regarding the impact of ageing and disease on the nervous system.

Lynch has encountered various challenges along the way, not least starting a lab from nothing in Trinity in the early 1990s. Science Foundation Ireland (SFI) didn’t exist yet, and she had to pester the faculty to get her first funding, and even had to go back to her old institute in London to scavenge among lab cast-offs for equipment.

Lynch never considered that being a woman was an issue. “Maybe that was naive,” she says. At one point early on in her career, Lynch was one of only eight female scientists working in her research institution, none of whom had children. So, when she was pregnant with her first child, others presumed that would be the end of her career. In Lynch’s mind that was never going to be the case: she was determined to progress with her work.

Annie Curtis is just returning from maternity leave to her postdoctoral position. She is one of several women in her lab to have had a baby in recent years.

Curtis has had a varied career. She has had research jobs in universities and pharmaceutical companies, and has worked in administration with SFI. However, the years spent out of research only confirmed to Curtis her love of it. “Visiting labs for SFI, I was really impressed by the science, and I didn’t want to be a spectator any more,” she says.

During her PhD, she worked on the circadian clock – the daily rhythm of life. Her new lab works on understanding the immune system. Curtis saw the link between the two.

This has now become a major project linking her lab in Trinity and her old lab in the University of Pennsylvania. She loves the autonomy of research. Having an idea, testing it, and the experiment going well are “like poetry”, she says. She never regretted returning to academia, even though the salaries are lower. She wakes up every morning “eager to go into work”.

Jane Ní Dhulchaointigh took a circuitous path from studying sculpture at NCAD to building a lab in an art studio and being selected as a finalist for the Ernst and Young Entrepreneur of the Year Awards.

So is she an artist, scientist, inventor, entrepreneur? All of these, though she says she only really felt like a scientist when she finally put on a white coat in her London lab.

Ní Dhulchaointigh is the inventor of Sugru (from the Irish word súgradh, “to play”), a mouldable silicone putty that bonds to lots of surfaces and cures to form a fixed but flexible shape. Time magazine listed Sugru as one of the top 50 inventions of the 21st century. I’ve used it to fix pot handles, a fridge drawer, a shower fitting and spectacle frames. Other people have done much more creative things, utilising Sugru’s unique characteristics to repurpose and enhance objects in their homes.

Ní Dhulchaointigh is reluctant to say she feels proud of her achievements, preferring to look forward to the next challenge. She gets her greatest enjoyment from seeing the inventiveness of the growing community of Sugru enthusiasts. She recalls a surgeon in Haiti who used some to repair his mosquito net and sent a message to her thanking her for the good night’s sleep.

Aoife Gowen’s career has gone pinball-like from theoretical physics, to finance, to food science, to medical imaging and on to chemical spectroscopy. She now lectures in DIT and is a recent recipient of a prestigious European Research Council starting researcher grant. This varied experience led to her current project, whereby Gowen’s lab will use chemical imaging to investigate how contact with water contributes to fouling or degradation of various synthetic materials, including medical sutures, pacemakers and water filters. “There are so few opportunities, I feel really lucky.”

She notes that the engineering class in UCD was only 18 per cent women. “It is absolutely essential that we have scientists and engineers, and we especially need more women.”

Lara Cassidy has just started a PhD analysing ancient human DNA. She finished her human genetics degree with first-class honours and won the Undergraduate Awards’ Bram Stoker Gold Medal for her essay on the evolution of the placenta.

Cassidy developed an interest in science at a young age from picking up popular science books left lying around by her father and from science documentaries on TV, especially The Velvet Claw.

So far, what she most enjoys about science is “getting really, intensely interested in something and the process of figuring things out”.

All of the women echoe the same sentiments: that it is a tough job, with many challenges, but that the autonomy and intellectual stimulation make it worthwhile.

Aoife McLysaght is a professor in genetics at Trinity College Dublin. She lectures in evolution and leads an European Research Council-funded research group