The future: health sensors that dissolve in the body 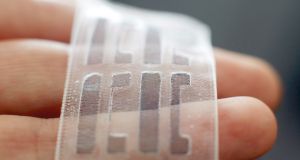 A surface sensor, or skin patch

How would you like to be fitted with miniature electronic devices so compatible with your body that you are physically unaware of them?

They would constantly monitor the functioning of your organs and tissues, transmit this information to your computer, harmlessly dissolve in the body when their job is done and detect the earliest sign of malfunction when remedial medical intervention is easiest. Some of these devices can even make medical interventions themselves. Well, it appears that we are firmly on our way to this desirable state of affairs, as described by Elizabeth Gibney in Nature last year.

Modern cars are packed full of sensors and computers, and are very reliable and easy to maintain. Of course, the conventional rigid and physically stable electronic sensors fitted into the body of a car engine would not suit the soft, curvilinear and regularly changing human body.

However, recent research has produced advanced materials and design layouts for electronic devices that eliminates this mismatch of properties between conventional sensors and the human body, as described by John A. Rogers of the University of Illinois, Urbana-Champaign (Journal of the American Medical Association, 2015).

Wearing or implanting electronic devices to monitor health status is not a new idea. Many procedures in clinical medicine already use conventional electronic implants. However, this standard electronic hardware carries significant risk of causing infections and provoking immune reactions in the body. These devices must also be surgically removed later, causing further patient distress and risk of complications.

Bioresorbable devices are now being developed with measurement performance as good as standard clinical devices but whose constituents naturally dissolve in the body, thereby eliminating the need for extraction. The new electronic devices are woven into the body, do not provoke an immune reaction and are almost imperceptible to the user.

John Rogers’s team has developed “epidermal electronics”, very thin patches that stick on the skin and can accommodate the normal bending, stretching and swelling motions of the body. These devices are biodegradable and packed with sensors that can detect almost all the vital signs, including temperature, pulse, heart electrical activity, hydration, Parkinson’s disease tremors and so on.

Zhenan Bao, an engineer at Stanford University, has also developed a sensor that sits on the skin and can detect increased stiffness in arteries, which is a predictor of heart attacks.

As useful as skin patches are, much more information is available within the body. A US team of neurosurgeons and engineers has just published a paper ( published online in Nature in January) describing the successful operation of a wireless sensor implanted in the brain that measures intracranial pressure and temperature and is then absorbed by the body, negating the need for surgery to remove it.

The measurement performance of the bioresorbable device compares favourably with standard nonresorbable clinical devices. It is planned to build similar bioresorbable sensors to monitor activity in organ systems throughout the body.

UCC medical graduate Rory Murphy is an author of this Nature paper describing the successful trial of the dissolvable wireless brain implant. He collaborated with engineers in the laboratory of Rogers to build the new sensors.

About 50,000 die annually from traumatic brain injuries in the US. It is important to measure intracranial pressure in the brain and inside the skull of those patients when they arrive in hospital, because increases in pressure can further damage the brain. Pressure cannot reliably be estimated from brain scans or clinical features.

Murphy would like to see Irish electronics getting more involved in this developing area. Irish graduates could learn the new electronic skills in American laboratories and bring the knowledge home. We already have the electronic infrastructure to develop a niche in this field: Intel and Analogue Instruments, the med-tech companies and the Tyndall Institute in UCC, where Dr Nathan Jackson leads a team developing biosensors.