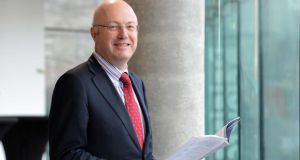 Grants are being provided next year to encourage more women with science degrees to remain in research or return to it after a break or career pause. Awards worth about €150,000 lasting two years will be offered with support for childcare costs and the possibility of part-time working.

Details of the new Science Foundation Ireland Advance Fellowship Award programme for women scientists were announced today at the release of the foundation’s review of 2013 and annual plan for 2014.

There were many highly trained women science graduates who left to have children or decided on a career break, said the foundation’s director general Prof Mark Ferguson. The aim of the programme was to help those interested in doing so to come back into research.

An initial 100 fellowships would be offered but if more women took up the offer more places would be made available, said Dr Ruth Freeman, director of communications, strategy and outreach in the foundation. “There are highly trained individuals who are currently not in the workforce.”

The scheme would provide financial support for two years and also the support of a mentor to allow women to resume careers either in academia or industry.

The 2013 review detailed the outputs achieved during the year in terms of spin out companies, licences and patents. It showed that a third of researchers who left foundation-funded teams took up employment in industry, with 60 per cent of these in companies based in Ireland.

The foundation set up seven major research centres during the past year, using €200 million in state funding and a further €100 million from industrial partners. At least two more or possibly three will be opened next year, he said.

The 2014 plan also details how the foundation plans to support academics and industry applying for awards from the EU’s new Horizon 2020 research budget worth €79 billion over the next seven years.

The Government had set a target for an Irish drawdown of €1.25 billion from Horizon 2020, Prof Ferguson said. “In order to achieve that target we must win and lead some of the big projects.” We had natural advantages in some areas including marine research, food, smart grid technology and in connected health, areas that matched up to funding aims under Horizon 2020, he said.

Each of the new research centres had been given targets and each would have a staff person charged with identifying potential research projects for Horizon 2020 funding.

The foundation now also had an agreement with the Department for Employment and Learning Northern Ireland to co-fund research projects that involved academic or industrial partners on both sides of the border. This would allow investigators to collaborate on Horizon 2020 bids or tap into other funding sources such as the Wellcome Trust.

Prof Ferguson called for more funding for research. “We are not alone when it comes to an interest in promoting science. We must increase money for research and development as we emerge from recession,” he said.