Of mice and medicine: the ethics of animal research 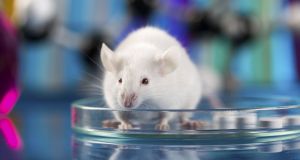 Ethical and moral dilemmas surround us at home and at work, in the supermarket, on holiday . . . everywhere. In an increasingly complex world, one ethically influenced decision is often in conflict with another, so most conscientious people try to determine what direction their moral compass should take based on their own priorities.

The ethics surrounding animal welfare are particularly loaded. Many of us oppose wearing fur, the testing of cosmetics on animals and substandard conditions for livestock reared for human consumption.

But what about animal testing in the name of scientific progress? For two centuries, various mammals – including dogs, cats, monkeys, pigs, cows and rodents – have borne the brunt of humankind’s quest to combat human mental and physical illnesses.

Despite constant opposition from animal-welfare groups such as Peta, their influence struggles to extend beyond the already-converted.

Although other species are still used in specialist labs, mice are by far the most commonly used mammal in medical and other scientific research. Why this particular species has become so central to scientific and medical research results from a combination of practicality, circumstance and the fact that human understanding of mice has reached a kind of critical mass.

“They bring several really important advantages for discovery-based research,” says Matthew Griffin, professor of transplant biology at NUI Galway. “They’re easily bred, small and have well-understood housing conditions. We have the facilities and the expertise to house and breed mice in a humane environment. ”

Perhaps the most important factor is the sizeable body of knowledge scientists have already collected for mice. Since the entire mouse genome was sequenced in 2002 – and subsequently compared and contrasted with the human genome – the lab mouse has become the most important animal model by far, widely used in the study of human diseases.

“They are the genetic model,” says Dr Roger Reeves, professor of medicine at the department of physiology at the John Hopkins University School in Baltimore, Maryland.

Reeves has spent decades researching the genetics of Down syndrome, and his research team have supplemented their genetic analyses in humans with the development of mouse models and molecular approaches to understand the why and how of gene dosage imbalance and how it disrupts development in Down syndrome.

“They’re crucial in terms of taking the info we have obtained from the Human Genome Project and translating it into some kind of biology that can be studied. We have a telephone directory of the human DNA sequence but this doesn’t tell us about the biology of human beings. In order to understand this, we have to have a system to study with its own biology. Test tubes don’t have biology, and cells in culture have a very limited biological make-up.”

Perhaps the most controversial reason why the use of mice is commonplace in modern experimentation relates to the various techniques that are now available for modifying their genome. “DNA editing technologies are already very well-established in rodents,” says Griffin.

There are about 450 inbred strains of mice. These strains offer a host of different genotypes and phenotypes for genetic and other studies.

Not only that but thousands of radiation-induced and chemically induced mutants provide valuable insight into the study of human diseases.

Animal-based research is heavily regulated. Scientists wishing to conduct experiments, for whatever reason, must go before an ethics committee to justify their actions through a discussion and debate about the potential benefits of any new treatment.

The benefits must be seen to be equal to or greater than the level of harm that might occur to the animals being tested. Survival procedures are then reviewed, and an evaluation of whether the amount of harm – be it pain, distress or isolation – has been reduced to the lowest level possible must be undertaken.

Some scientists are pushing to reduce the use of animals of any kind in experimentation but not necessarily at the expense of progress.

“Certainly there are many people within academic circles who are working hard to replace animals in experiments where it’s legitimately possible to do so,” says Reeves. “Often we can use cell cultures or even test tube-based experiments to get the kind of basic info that might be required.

“Besides, if you can do an experiment in cell culture, it will most likely be much faster and much cheaper to carry out,” he says. “Review and ethics committees will expect researchers to be able to justify exactly why mice must be used and not some other kind of experiment.”

Every day, about 25 million mice are used globally in research into and development of treatments for diseases including malaria, heart disease, cancer and Aids.

Such research has helped scientists answer many of the most significant biological questions of our time, demonstrated by the many Nobel prizes won by researchers who made their discoveries through mouse-based experimentation.

Mice first became central to scientific research at the beginning of the 20th century. In 1909, scientist Clarence Cook Little mated closely related mice for several generations, creating the first inbred strain. Inbred mice are perfect for the study of the biological effects of genetic mutations or environmental factors such as diet, as the animals are almost like a blank canvas to work from.

Rodents are particularly prized because they share about 80 percent of our genes. They have been described as the “perfect model organism” for human biology.

The first “knockout mice” created by geneticists in the 1980s allowed for particular genes of interest to be removed, which subsequently produced mouse models of human illnesses such as Alzheimer’s, heart disease and cystic fibrosis.

They have also been crucial to development of disease-fighting molecules, known as antibodies. Humanised monoclonal antibodies are used to fight breast cancer, leukaemia and arthritis.