Fusion is in fashion, and nuclear is going green 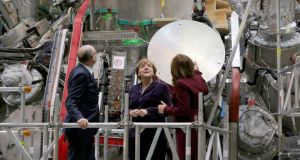 German pride in its technological prowess was on display this week at an experimental fusion reactor in the northeastern city of Greifswald. Chancellor Angela Merkel was on hand to push a button and set off a burst of hydrogen plasma at temperatures 10 times hotter than the sun.

“Maybe this moment will once be remembered as a milestone in fusion research, ” she said. Even if the milestone doesn’t appear she can probably count on a brass plaque stuck on a nearby wall.

She would have understood what was going on much better than most of the 200-odd visitors on hand at the Max Planck Institute for Plasma Physics.

The politician has a doctorate in physics and would know all about the energy source of the sun, the fusion of two hydrogen atoms to make one helium atom, with an attendant release of massive energy based on Albert Einstein’s famous formula E=mc2. Energy resources The German government is strongly committed to fusion research, given it has funded about 80 per cent of the €1.1 billion needed over the past 18 years to build the reactor. The country lacks the energy resources it needs and so must import gas from Siberia and other countries.

It is a major user of small-format solar, with home owners mounting solar panels on their roofs. This, however, does not do it for large industrial plants, which take power from the continent’s integrated grid – much of it from nuclear plants. Nuclear power goes in and out of favour with EU governments depending on the political landscape and, at the moment, it is well in fashion.

Alarming changes in climate, with floods and powerful storms, make the dangers of a warming climate seem very real but no industrialised country can easily give up a bad fossil fuel addiction.

So nuclear seems like the only option to lower carbon release and keep the electricity system energised. Britain has taken this approach and is planning new plants even as it ramps up wind energy supply.

The great hope, however, is fusion, in a sense a kind of “green” nuclear. The nuclear that has been in use since the 1950s is based on fission – the splitting of big heavy atoms such as uranium into smaller ones – but it is a very messy business. Lots of nasty leftovers build up, including plutonium, bad enough as a waste product but even worse when turned into a nuclear weapon. Harmless helium Fusion doesn’t split atoms; it binds them into harmless helium. It does produce a certain amount of radioactive waste, things exposed to radioactivity such as shields and components for example. But it doesn’t produce the dangerous high-octane waste that has built up over decades at the Sellafield site in Britain.

The problem with fusion however is it is very difficult to achieve. No one has yet made it work.

The Greifswald reactor is still producing only flashes, not electricity. A huge ITER collaboration based in France involving 35 countries banded together to build an even bigger fusion reactor, a group that includes the Chinese, EU countries and the US.

ITER’s predecessor JET in 1997 produced 16 million watts (16MW) of power from an input of 24 MW, bad business given they put more in than they got out. But something got out and that is what inspires ITER and the German programme. ITER hopes to deliver 500MW from an input of 50MW.

Pessimists point out that people have been working on this for 50 years and still have not cracked it. We can’t look to fusion to get us out of our energy problems in the short term, but will we manage it even in the long term?