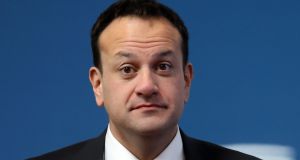 Leo Varadkar arrives for the second day of a Special European Council summit in Brussels on Friday. Photograph: EPA

Taoiseach Leo Varadkar has criticised Sinn Féin’s plan to hold nationwide rallies, portraying them as the next stage of the party’s “campaign of intimidation and bullying”.

Mr Varadkar said on Monday the plans announced by Sinn Féin leader Mary Lou McDonald for a series of public meetings around the country were an unwelcome development.

Sinn Féin’s meetings aim to rally public support for the party’s efforts to get into government.

Over the next fortnight, meetings are planned for Dublin, Galway, Cavan and Newry. The first will take place in Cork on Monday night.

Sinn Féin obtained the largest number of first preference votes in the general election and received more votes for the position of taoiseach than either Mr Martin or Mr Varadkar when nominations were sought for the position in the Dáil on Thursday.

Ms McDonald said there was now a clear choice: “on the one hand for a government of change or on the other hand, the carve up of power again between the two old parties of Fianna Fáil and Fine Gael.”

While Sinn Féin has repeatedly said it wants to remove Fianna Fáil and Fine Gael from office, it is unable to form a coalition of parties on the left.

A stable government now appears to require two of the three largest parties forming a coalition.

On Monday Mr Varadkar repeated his claim that Sinn Féin was not a normal party and had a casual relationship with democracy.

“Generally what happens in a democracy is that people vote and the votes are counted and then parties try to form a government.

Mr Varadkar continued: “I think these rallies are designed to be the next stage of Sinn Féin’s campaign of intimidation and bullying. We have seen that online.

“Now we are seeing it in their rallies and I would not be surprised to see if their next step is to take it to the streets. This is not a normal party and this is a party that has a casual relationship with our democracy.”

Mr Varadkar said the onus still fell on Sinn Féin and the parties of the left to try and form a government but then signalled his view they would not be able to do it.

“(Sinn Féin) and the left believe they have won the election.

“They must prove that now by forming a government. If they can’t form a government they should ‘fess up and say they did not win the election.

“Even if they had, they disagree with each other so much they would not have been able to form a government anyway.”

Asked if his meeting with Fianna Fáil leader Micheál Martin tomorrow signalled a desire by Fine Gael to go into government, he said his party was still preparing for opposition.

“As we said last week, we would be willing to engage in exploratory talks with any party that wants to speak to us. That is happening with Fianna Fáil and the Greens this week.

“Labour have their own issues and don’t want to talk and the Social Democrats cancelled the meeting we had arranged with them.”

The Taoiseach was speaking at an announcement that the credit card and payment company, Mastercard, is to make Dublin its technology hub for Europe.

The company will focus the hub’s activities on artificial intelligence, cyber security, blockchain and user experience.