Opinion: Stories focus on squabbles, PR and what can secure a party advantage over its rivals 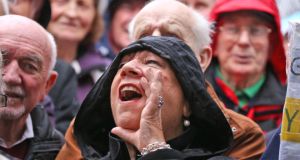 On Friday, October 11th, this newspaper had a story on its front page headlined: “Coalition targets welfare benefit cuts”; On October 12th: “FG tackles Burton over ‘welfare traps’”; on October 14th: “Coalition agrees free GP care for under-fives”; on the morning of the budget: “Noonan to announce range of harsh budget cuts.”

On October 9th, the Irish Independent led with: “How budget will affect pensioners and young families”; on October 11th: “Free GP care for under-fives in jeopardy”; on October 14th: “Budget throws a lifeline to hard-pressed families”; on budget day: “Pensioners back in budget firing line.”

Other newspapers did likewise, and so too did RTÉ and other broadcast stations.

Infantile impulse
What was the point to this? We were all going to find out on budget day what the budget contained anyway and, given the closed manner in which the major decisions concerning our society are taken by a political elite, there was nothing anyone could do about pre-leaked decisions. So why all this journalistic effort for essentially damn all except the infantile impulse to be “first” with the news?

On Wednesday, October 16th this newspaper published a political commentary piece, which said: “As with every budget, the big question is whether there is some measure that will jump out from the rest to cause serious embarrassment for the Government.”

In a commentary piece on an inside page of the Irish Independent on the day after the budget, one of its political writers wrote: “Michael Noonan said there were a few ‘bits and bobs’ to be sorted out as the budget negotiations reached their final stages. The bits were clearly a series of quite unpleasant cutbacks in services and benefits that will hit various different groups of people in a variety of ways. The bobs were a bundle of measures to stimulate investment, keep up the momentum in the tourism industry, revive the construction sector and maintain the signs of uplift in the property market.” Later in the piece: “But there remain concerns within the Cabinet about whether a government gets appreciation for giving one benefit, versus taking one away.” It ended: “Political necessity takes priority.”

On Saturday last, in another commentary piece in this newspaper, the following appeared: “The latest in the series of harsh budgets has proved politically more acceptable than its predecessors but the Coalition needs to tread warily because there are signs that the Irish public has taken about as much pain as it can stand. One of the peculiarities of democratic politics is that the howls of outrage from small, well-organised lobby groups can often have far greater political impact than the mood of the broad mass of ordinary voters.” The reference was to pensioners.

The Sunday Independent three days ago led with: “Ministers fight like cats and dogs post-budget.” The Sunday Business Post led with “Post-budget squeeze for Reilly and health service” and on pages 10 and 11 an “inside” story on Cabinet battles by its political editor, Pat Leahy, whose book The Price of Power: Inside Ireland’s Crisis Coalition was published recently.

The book is a superb inside account of what has gone on within the Government since it came to office in March 2011. But what marks so much of political reportage and commentary and what marked Pat Leahy’s book is an absence of politics: very little analysis of the effects of Government decisions on society, very little explanation of the possible choices there are in the management of society and the economy and the reasons for the choices made.

‘Inside’ accounts
I acknowledge that much of my own political writing for many years was of this vein, “inside” accounts of what happened in governments or within political parties, with little regard to the consequences to society of the choices politicians made and the mindsets that informed those choices.

It is as though political commentary is almost not at all about politics, except about politics in a trivial sense – internal squabbles, the public relations effects of decisions, the advantage scored by one party against another, the possible electoral consequences of initiatives of course being “first” with news we will all find out about anyway. Almost nothing about the social effects of government policies. Nothing about the perspectives/ ideologies of the parties that inform the policies they avow and actions they take.

For instance, nothing at all about the choice made to cut funding for mental health services from €35 million to €20 million and the basis for that choice, the choice to abolish the telephone allowance for old people, the choice to cut the availability of medical cards, while leaving untroubled the lifestyles of so many of us, including those of Cabinet Ministers, who could bear the burden of the fiscal adjustment, often without noticing.

And where occasionally there is reference to the underlying ideology, invariably it is accompanied by an unquestioning acquiescence to the supposed absence of any rational alternative and dismissiveness of “howls of outrage from small, well-organised lobby groups”.

Isn’t there something awry here?

1 Hotels, retail, hairdressers, churches, gyms to open next Tuesday, followed by restaurants and gastropubs on Friday
2 Brexit talks: UK seeks to strip fishermen of 80% of fish caught in EU waters
3 Exiting Level 5: What will reopen and when will it happen?
4 Austria bids farewell to Fucking after a millennium of misunderstandings
5 Forget Black Friday, welcome to Green Friday - 30 Irish retailers with great deals
Real news has value SUBSCRIBE