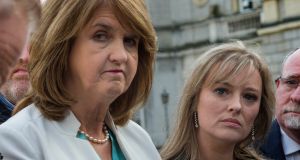 Labour Senator Mairia Cahill with Labour leader Joan Burton. A party sources said “we believe we will be back in government”. Photograph: Brenda Fitzsimons/The Irish Times

Senior Labour Party figures have warned the party could lose up to 20 seats – nearly half its current number – in the next general election.

The party has carried out analysis which claims on the party’s worst day it will return 10 TDs and on its best 16.

The results were compiled by senior party strategists and were based on constituency polls carried out across the country.

A senior Labour source said: “On our best day we will bring 16 TDs back to the Dáil and with that we will be back in government.

It believes on a good day it can also secure seats in Carlow Kilkenny with Minister for Rural Affairs Ann Phelan, Cork North Central with Minister of State at the Department of Health Kathleen Lynch, Dublin North West with TD John Lyons and Clare with TD Michael McNamara.

The senior source said: “We believe we will be back in government with those figures.”

Minister for Communications Alex White would be the biggest casualty if these results were replicated in the election.

The Labour party won a historic 37 seats in the 2011 general election including 18 seats in Dublin.

It doubled its share of the vote and became the second largest party in the Dáil.

The junior Coalition partner is currently polling about 7 per cent.

In a letter to its supporters this week, the party said members have “a lot to be proud of over the past 4½ years”.

The letter also vows to reduce the cost of childcare for working parents, phase out the Universal Social Charge for low and middle income workers and roll out universal healthcare if re-elected to government.

Senior figures in the party have been moving to warn against a majority Fine Gael government.

Siptu president Jack O’Connor said a single-party Fine Gael government “must be avoided at all costs”, a message seen as laying the ground for Labour’s general election campaign.

In a message to union members, Mr O’Connor claims a single-party government is a real possibility that can only be prevented by more voters deciding to support the Labour Party in the run up to polling day.

Labour sources characterised the article as “framing the choice” facing the electorate.

The approach is likely to be replicated by party Ministers and TDs in the coming weeks.

Minister for Communications Alex White recently said Fine Gael should not be let into government on its own because this would lead to a “more right-wing government”.