Department of Justice secretary general Brian Purcell was accused of putting on a ’farcical’ performance and ’talking down the clock’ during an appearance before the Oireachtas Justice Committee to discuss the Guerin Report. 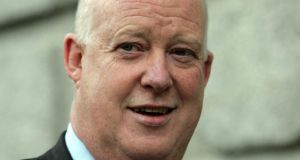 The commission of inquiry chaired by Mr Justice Nial Fennelly into the covert recording of phone calls at Garda stations should be allowed do its work, Tánaiste Eamon Gilmore has said.

“I have no doubt that it will do its job and that anybody who has information to give to that commission will give the information fully,’’ he told the Dáil today.

The Tánaiste was replying today to Fianna Fáil TD Michael McGrath, who said the Secretary General of the Department of Justice Brian Purcell would not and did not answer any questions at the Oireachtas justice committee yesterday on the departure of the former Garda Commissioner Martin Callinan.

Mr Callinan announced his retirement after Taoiseach Enda Kenny had been informed of the covert taping and asked Mr Purcell to visit the then Garda Commissioner at his home.

Mr Purcell said yesterday he was precluded from answering questions on the matter because of the Fennelly commission.

Mr McGrath said that, in effect, Mr Purcell and Mr Kenny were hiding behind the commission and were treating the Oireachtas and the general public with disdain.

There was no legal obstacle to Mr Purcell coming before the committee and answering questions about Mr Callinan’s departure and Mr Kenny telling the Dáil about the role he played.

Mr Gilmore said there were issues within An Garda Síochána that have needed to be addressed for a very long time and long before the current Government came into office. The Government, he added, had made a number of decisions which would radically change the way in which the force was managed and reported to the public.

A critical pillar in that was the establishment of an independent Garda authority, said Mr Gilmore.