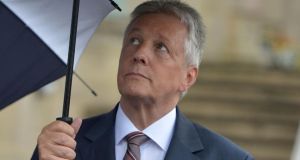 DUP leader Peter Robinson: appears to want some commitments in relation to a body or bodies that would help establish whether or not the IRA has gone away. Photograph: Getty Images

Northern political eyes and ears are focused on the House of Commons this afternoon where Northern Secretary Theresa Villiers will update MPs on the parlous state of the political process. What’s new? MPs will think.

The test for Villiers is to reassure the former without over-antagonising the latter. It’s a balancing act that could determine whether towards the end of this week or maybe even next week the North’s five main parties start engaging in sensible concentrated round-table negotiations involving Dublin and London to find a way out of this mess.

This could be the creation of a variation of the Independent Monitoring Commission (IMC) that would advise politicians on the status, or non-status, of the IRA and other republican and loyalist organisations.

It could also involve a role for the British National Crime Agency (NCA) in combating Border smuggling, fuel laundering and other crimes associated with current or former paramilitaries.

Villiers has already stated she is fairly amenable to such proposals but McGuinness insisted yesterday there must be “no preconditions” to talks.

What Villiers may have to be mindful of in her statement is that while the NCA and a remodelled IMC may be good ideas, shouldn’t it be for the parties and the British and Irish governments in the talks to agree to such proposals?

Somehow she must keep both Robinson and McGuinness, if not exactly sweet, then at least not too grumpy so that full-scale talks can begin.

On Sunday at the Bobby Storey press conference in west Belfast Martin McGuinness got annoyed with The Irish Times. He suggested only a “fool” would miss that the rivalry between the DUP and Ulster Unionist Party (UUP) was a “big dynamic” in this crisis.

On the same theme Sinn Féin’s Gerry Adams said this was a “contrived” impasse. He added that the murders of Kevin McGuigan and Gerard Jock Davison were the “catalyst for this crisis” but, “the twists and turns of the last few weeks are entirely down to the manoeuvrings and machinations of the UUP and the ease with which the DUP has been spooked by them”.

The Irish Times hasn’t missed this dynamic, referring to it on many occasions. But a bigger dynamic – which Sinn Féin can’t seem to acknowledge – is PSNI Chief Constable George Hamilton’ assessment that the IRA exists and some IRA members were involved in the killing of McGuigan.

The simple fact is unionists believe George Hamilton rather than Gerry Adams or Martin McGuinness. So, the Sinn Féin president was asked by this newspaper, could Sinn Féin assure unionists that the IRA has really gone away?

Adams, at least, agreed that this will be another dynamic in the talks - if they get properly started. “Let’s talk to the unionists, let’s not second guess, let’s see how they can be assured, and then let’s see can we assure them,” he said on Sunday. “I don’t know if we can or not,” he added.