Siteserv controversy exposes the lack of accountability in our political system 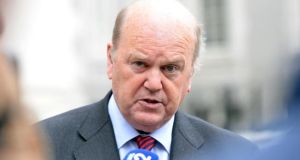 Minister for Finance: Catherine Murphy TD should not have had to use Freedom of Information legislation to get answers that Michael Noonan avoided giving to her repeated parliamentary questions. Photograph: Eric Luke

The Siteserv controversy is a dreadful own goal by the Government. We now await the outcome of the investigation conducted by Kieran Wallace and Eamonn Richardson and overseen by a retired High Court judge, Mr Justice Iarfulaith O’Neill.

Who knows what further investigations may follow, as efforts are made to clarify the details surrounding the 2012 sale of Siteserv to Denis O’Brien’s Millington firm for €45 million.

There is no doubt that Siteserv will rumble on for some time. There are important questions to be answered.

But when we reflect on how this controversy unfolded, it bears asking whether the Government would have received quite so much criticism if the Minister for Finance had been more forthcoming in his initial responses to Deputy Catherine Murphy’s parliamentary questions surrounding the IBRC transaction.

Thanks to Murphy’s relentless pursuit of the issue via repeated parliamentary questions and use of Freedom of Information requests, we now know that both Noonan and senior officials in the Department of Finance were concerned about the Siteserv deal, as well as about a series of other large IBRC transactions.

All very different from the Minister’s obfuscation in his response to Murphy in the Dáil on December 16th, 2014, when he told her that he was “advised that the board of the bank at that time were satisfied” that the Siteserv deal represented “the best return for IBRC”.

This episode perfectly illustrates two major weaknesses in our political system: a Government that is not held adequately to account by parliament; and a mindset that eschews any interest in true openness and transparency.

The Dáil reforms introduced by this Government since 2011 were supposed to change things, but in reality this Government treats the Dáil and Seanad with just the same disdain as its predecessors. We see this each week in how Ministers react to parliamentary questions.

Under Dáil standing orders we’re told that the purpose of a parliamentary questions is “to elicit information upon or elucidate matters of fact or of policy”. It would seem reasonable to expect, therefore, that when a Dáil deputy asks a question he or she should receive suitable elucidation in the response.

More normally than not, however, the opposite is the case. Each week in the Dáil we witness cat-and-mouse games between TDs and Ministers. The latter hide behind carefully crafted Civil Service scripts and do what they can to avoid providing direct answers to questions. It thus requires patience and tenacity from those TDs determined to pursue them with repeated questions.

In a heated exchange last week with Sean O’Rourke of RTÉ, Noonan observed that “when the proper procedure was invoked via Freedom of Information” by Catherine Murphy “all the information was given out”.

Surely, under a proper process of government accountability, Murphy would not have had to use Freedom of Information legislation to get the answers Noonan avoided giving to her repeated parliamentary questions.

The deputy should not have had to waste public funding in seeking her replies: providing a response to a parliamentary question doesn’t come cheap; nor does Freedom of Information.

The long-awaited legislation (reinstating legislation that had been seriously watered down by the Bertie Ahern-led Fianna Fáil government a decade earlier) was supposed to be more than just a box-ticking exercise.

Yet, despite this legislation, the mantra within the Government and the senior echelons of the Civil Service seems to be to treat Freedom of Information as, at best, a necessary irritant. The default position feels like one of giving away as little as necessary, and certainly not to make it too easy. FOI requests are treated as inconvenient disruptions to the important business of government. The agenda is decidedly reactive.

There needs to be a culture shift. The Ministers and their civil servants need to appreciate the principles that underlie Freedom of Information – namely, to provide citizens with the information they deserve to know.

For this to happen the agenda needs to shift to one that is more proactive: instead of waiting behind closed doors for the requests to flow in, why not simply put the information out there as a matter of course? Is that really such a revolutionary idea?

The Siteserv controversy has been another home-grown crisis by a Government that had sought to put 2014 – its annus horribilis – behind it. By the simple act of not providing a proper answer to a parliamentary question the Government is once against facing a political storm that didn’t have to happen.

We can only hope that lessons are learned from this episode about the need to treat the Dáil and its members with more respect, and to engage more constructively with the openness and transparency agenda.