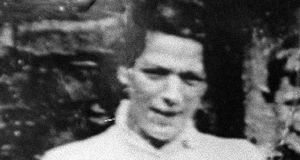 Undated handout file photo of Jean McConville before she vanished in 1972. Photograph: PA

Sinn Féin has been quick to suggest the arrest of Gerry Adams was “politically motivated” but the party should treat the investigation in the same spirit it says led its leader to make himself available for questioning.

In a statement issued by Adams last night as news broke, he said he had “concerns about the timing” of the arrest, even though the party cannot bring itself to call it that.

Adams said he was “voluntarily meeting” with the PSNI to discuss the murder of Jean McConville, and deputy leader Mary Lou McDonald said a “meeting” was now taking place following Adams’ decision to make himself “available to meet the PSNI about the Jean McConville case”.

McDonald then went on to claim the “timing of this latest decision by the PSNI is politically motivated and designed to damage Gerry Adams and Sinn Féin”.

Other party spokespeople have taken the same line on various broadcasts in Ireland and the UK since last night, questioning the PSNI’s motivation in moving weeks out from an election.

When pressed on these claims on radio this morning, McDonald responded by saying hardliners in the DUP and elements of Jim Allister’s Traditional Unionist Voice have consistently called for Adams’s arrest.

The Dublin Central TD admitted nobody in Fine Gael, Labour and Fianna Fáil could be blamed.

It should be noted in all of this Adams himself volunteered to speak to the PSNI about their investigations.

In that spirit, he and Sinn Féin should co-operate without attempting to smear attempts to get to the truth about who is responsible for the abduction, murder and disappearance of the mother of 10 children in 1972.

This is an active investigation.

In March, veteran republican Ivor Bell, now 77, was charged in connection with the murder.

Bell was also among a delegation of republicans, including Adams and Martin McGuinness, flown by the RAF to have ceasefire talks with British ministers in 1972.

There would have been howls from those unionists mentioned by McDonald if Adams’ arrest happened a week after polling day, rather than one week before it.

While making suggestions of political interference in the arrest of Adams, McDonald said the PSNI is not the RUC, and it took a lot of work, including from Sinn Féin, to bring about the changes in policing in Northern Ireland.

For the party to now smear the PSNI by suggesting it is in some way involved in influencing elections damages those changes.