Sinn Féin seeks to pull off a historic upset in Foyle 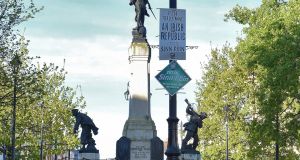 Sinn Féin election posters on a lamppost at the top of Shipquay Street. Photograph: Trevor McBride

Stand at the war memorial in the centre of Derry and look down Shipquay Street towards the Guildhall and you’ll see an election slogan from almost 100 years ago. “If you really want an Irish Republic,” the posters read, “vote for Sinn Féin.”

First used in the 1918 general election – when Sinn Féin won a landslide victory across Ireland in the wake of the first World War – it’s the third outing for these replicas in recent times.

Back in 1918, Sinn Féin candidate Prof Eoin MacNeill – the former leader of the Irish Volunteers and author of the famous countermanding order which attempted to call off the Easter Rising – was narrowly elected in what was then the constituency of Londonderry City.

This time, buoyed up by success in Foyle in the last Assembly elections when Sinn Féin polled 2,000 more first preferences than the SDLP, the party is attempting to do the same and elect the first Sinn Féin MP for Foyle in almost 100 years.

“There is a momentum that’s built up with Sinn Féin,” says one voter.“They seem to have the young people’s vote, and young people feel they’re working for them, so I do think they’re going to increase their vote.”

“I vote Sinn Féin because I had to go out and march for the right to vote,” says another. “Elisha McCallion is a good candidate, she’s well-liked. I’m confident.”

“Sinn Féin has been trying to take this seat for some time but it’s the first time it has had a realistic chance,” says journalist and lifelong republican Eamonn MacDermott.

“Sinn Féin are on a surge, they’re on a high, they’re very much in the ascendant, and it shows in the degree of confidence they have at the moment.

“There is still a lot of resentment within nationalism in general at the way they’ve been regarded by the DUP, and there’s a very defiant mood among a lot of people I wouldn’t even class as hardcore Sinn Féin supporters but who are there voting for Sinn Féin because they want to put it up to Arlene Foster.

“It’s hard to call it directly – if the winning margin from the Assembly election is repeated Sinn Féin walks away with it, but they have a fight on their hands because the SDLP vote does turn out in Westminster elections and they do also get some tactical votes from unionists.”

As politicians and their campaign teams well know, the first-past-the-post winner-takes-all nature of Westminster elections make them an entirely different prospect from the Assembly elections, which uses proportional representation to allocated five seats per constituency.

Once the largest nationalist party in Northern Ireland, in the 2015 Westminster election the SDLP returned MPs in three constituencies – South Belfast, South Down and Foyle – compared to Sinn Féin’s four.

The sitting Foyle MP, Mark Durkan, is one of the SDLP’s heavyweights. A former party leader and Stormont finance minister, he has been the Foyle MP for 12 years, and is sitting on a substantial majority of more than 6,000 votes.

“At the moment the way people are talking in the city it feels like 50/50 between the two parties, but Mark does have great charm, and a good way with the people,” says one nationalist voter.

Durkan is up against Sinn Féin’s McCallion, a new MLA and popular former mayor of Derry who in March was elected on the first count with an impressive first-preference vote of more than 9,000.

“Personally I think Mark Durkan will win the Westminster seat,” says the SDLP’s former director of communications Ruairí­ O’Kane, “but you can’t ignore Elisha McCallion and Sinn Féin’s performance – her result in the Assembly election was outstanding.

“Westminster elections are a different beast. If you look at Mark Durkan’s winning margins over the years, he’s shown he has his own personal vote as well as the party vote, and it is notoriously difficult to shift an incumbent.

“I think he will do it. I’d be surprised if he didn’t, but his majority may well be reduced and you can’t ignore the Sinn Féin poll from earlier this year. If they put that on the board this time it may well come down to tactical unionist voting to keep the seat.”

While the Democratic Unionist Party’s candidate, the MLA Gary Middleton, took almost 5,000 votes in 2015 and is expected to poll a similar number this time around, the demographics in this predominantly nationalist constituency make it virtually impossible for a unionist to win – again raising the possibility that, in a close race, some DUP voters might make a tactical decision to vote SDLP.

In 2015 the Ulster Unionist Party polled 1,226 votes, but with no candidate on the ballot papers in Foyle this time round, transfers to the SDLP could prove key.

“If it came down to it I would vote SDLP to keep Sinn Féin out,” admits one Ulster Unionist Party voter.

“I’d rather vote for my own party first, but I don’t agree with Sinn Féin’s past or what their party stands for, so if it was to keep them out I would vote for the SDLP.”

“We’re in a tight fight,” says one veteran SDLP canvasser. “Before the last Assembly election you could virtually have put a cigarette paper between the size of the vote for the two parties.

“It’ll come down to voter turnout. We’ve taken this on board, and we’re telling people who might otherwise sit in the house on polling day and not bother that they really need to get out and vote.”

As always with elections, it will come down to the numbers. Psephologist Gerry Murray is already calling it for Durkan and the SDLP in Foyle.

“In the last Westminster election Mark Durkan polled 17,700 votes which is still 1,400 more than Sinn Féin’s first preferences in the recent Assembly elections, so while I think it’s true to say his seat is under threat I think it’s a tall order for Sinn Féin to put another 1,500 or 1,600 onto their Assembly vote to unseat him this time around.

“But there has been a shift – and had this election been taking place in even two years’ time I think there would be a different result,” says Murray.

“It may be too soon for them to overtake Mark Durkan at Westminster,” says former Sinn Féin MLA turned political commentator Daithí­ McKay, “but it was a major psychological boost to them – and a blow to the SDLP – that Sinn Féin became the biggest party in Foyle in the Assembly elections.

“I think it will take time to unseat the SDLP in what is ultimately their heartland and their birthplace. It is the home of John Hume, and the party’s roots are seen as being in Derry, but I feel that Mark Durkan will become the last SDLP MP.

“I don’t see Alasdair McDonnell being returned in South Belfast, and I think Sinn Féin will take South Down, so it may be that Derry is the last stronghold for the SDLP in Westminster.

“It’s clear the momentum is with Sinn Féin in Foyle, and it’s clear also that younger voters are voting Sinn Féin, so I do think that with generational change over the next five to 10 years you will ultimately see a Sinn Féin MP in Foyle.

“Mark Durkan may hold out, should hold out this time, but eventually Derry will fall to Sinn Féin, and when it does that is the end of the SDLP,” says McKay.

Foyle: At a glance

- Covers the city of Derry and some rural villages