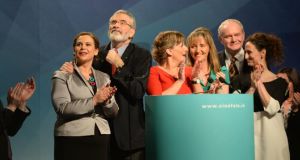 Party figures have cast doubt over recent opinion polls that show Sinn Féin hovering around the mid-20s and claim their own internal polls put the party around 20 per cent. Photograph; Dara Mac Dónaill/The Irish Times

Sinn Féin is planning on having an election candidate selected in every constituency by next month and is considering running two candidates in a number of areas to capitalise on strong poll ratings.

However, the party is adopting a two-phase strategy for selecting candidates and will not finalise its tickets until much closer to the general election, which is due in spring 2016.

Sources said it will hold off on deciding whether to run two candidates in certain areas in order to better assess its performance in national polls, as well in local research undertaken by the party.

Two candidates will be selected for a number of constituencies where the party is strong, such as Louth and Dublin South West, from the off, however.

Earlier this week, Gerry Adams said Sinn Féin will stand a candidate in each of the 40 constituencies in the country but declined to say how many Dáil seats it hopes for.

Party figures have cast doubt over recent opinion polls that show Sinn Féin hovering around the mid-20s and claim their own internal polls put the party around 20 per cent.

The first phase of their election preparations will be complete by St Patrick’s Day, with conventions currently taking place. Its second phase will involve adding extra candidates where appropriate.

First phase Party strategists say 47 candidates will be in place by the end of the first phase, which could rise to as much as 60 closer to the election and following the second phase.

Sinn Féin is hoping for gains in both four-seat Limerick city and three-seat Limerick county, where it performed well in the local elections but does not have a sitting TD. Wicklow, Waterford and Galway West are constituencies without a Sinn Féin TD also seen as possible gains.

The party aims to hold its two seats in Donegal, a county which sees its two three-seat constituencies merge into one five-seater.

Cavan-Monaghan is also mentioned as a possibility for two seats, even thought the constituency drops from a five- to a four-seater. Caoimhghín Ó Caoláin, the sitting TD, is based in Monaghan while Senator Kathryn Reilly is based in Ballyjamesduff, Co Cavan.

Vote management One source said two seats in Cavan-Monaghan is a possibility if the local Sinn Féin vote turns out, adding that tight vote management will be needed in Louth to capitalise on existing support.

In Dublin, a number of constituencies are seen as possibilities for two candidates, including Dublin Mid-West where councillor Eoin Ó Broin will be the first candidate.

Cork North Central, where Jonathan O’Brien is the party TD, is also seen as possibility for a second candidate but sources say no decisions will be taken until much closer to polling day.

However, sources acknowledge the party’s organisation is not strong in some areas, making a seat unlikely in certain constituencies. These include Kildare North, Kildare South as well as Cork North West and Cork South West.

Sinn Féin has also changed its party rules to enable it to add women to tickets, in a “gender intervention” process. It is aiming for women to comprise 40 per cent of all its general election candidates.