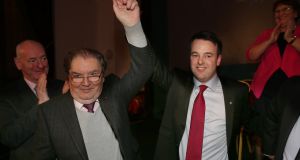 SDLP leader Colum Eastwood with former party leader John Hume at the conclusion of the conference. Photograph by Declan Roughan 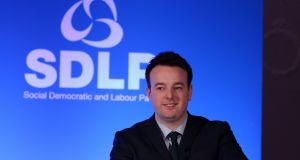 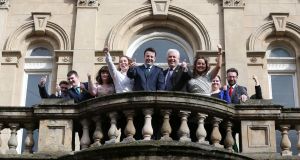 SDLP Leader Colum Eastwood with (next left) Deputy Fearghal McKinney and party colleagues on the balcony of St Columb’s hall before the start of the conference. Photograph by Declan Roughan

The Assembly election on May 5th must be a referendum on the record of Stormont leadership from Sinn Féin and the DUP over the last nine years, the SDLP leader has said.

Colum Eastwood was speaking at his party conference in Derry on Saturday.

In his first address as leader, four months into the role, he paid tribute to his political mentor former SDLP leader John Hume, who was in the front row at St Columb’s Hall, and to former deputy leader Seamus Mallon.

Abandoning the SDLP’s usual autumn conference spot, Saturday’s event which was organised at short notice, was less conference and more election rally - aimed at stemming or reversing the serial decline experienced by the party over the last 18 years since the Good Friday Agreement.

The SDLP has 14 MLAs in the Northern Ireland Assembly at present but going into the elections there are question marks over the safety of seats in West Belfast, Upper Bann, South Belfast and Foyle.

Mr Eastwood claimed Sinn Féin was stretching itself by running three candidates in Foyle on May 5th and suggested the party could suffer the same fate that saw Pádraig MacLochlainn lose his seat in Donegal at last month’s general election across the border.

“The Joint First Minister Martin McGuinness has announced the he is coming back into Derry in the expectation that he will be gifted three seats,” Mr Eastwood said.

“Well Martin should take a look and see what happened recently in Donegal. Three into two won’t go. And in a few short weeks’ time Derry will tell them the same.”

In an upbeat performance on Saturday night, Mr Eastwood said May’s assembly election should be a referendum on Sinn Féin and DUP’s record over the last nine years.

He described their approach as disjointed and dysfunctional with regard to the economy, education, skills and “handing welfare powers to the Tory party”.

He told delegates his party will only enter government in the North if funding is secured for the A5 dual carriageway, the A6 dual carriageway and expansion at the Ulster University site at Magee in Derry.

He also said the SDLP will not support a programme for Government “unless there are agreed spending increases for vocational training, university places for undergraduates and postgraduates and apprenticeships”.

He added: “In the past this party has stayed within the Executive without signing up to a Programme for Government. That ends now.”

Mr Eastwood said the power to reduce corporation tax to Northern Ireland from Westminster “is simply not enough” and called for the devolution of more fiscal powers, telecoms and broadcasting.

“We want more intensified North-South economic integration and an all-island plan for infrastructure,” he said.

“All of this needs to be within a long-term financial framework agreed with London which will give Northern Ireland sufficient financial security to take on long term transitions such as our own tax system and our own welfare system.

“And such a financial compact should be for thirty years and would continue in the event of the constitutional status of the North changing. No other party has identified such a radical framework for prosperity.

His message to dissident republicans, including those responsible for a recent bomb attack on a prisoner officer in east Belfast, was that they were in conflict with the Irish people and “that is a fight you’ll never win”.

On the centenary of the Easter Rising, Mr Eastwood said there was a responsibility to redouble efforts to reconcile with Unionist people and in a comments perhaps aimed at moderate unionists ahead of the election quoted Ulster poet John Hewitt, who wrote:

“This is my country; my grandfather came here

And raised his walls and fenced the tangled waste

And gave his years and strength into the earth”

He said: “Hewitt was a great believer in regional identity in Ireland and described his identity as Ulster, Irish, British and European.

“My grandfather fenced that same tangled waste, just outside of Cookstown in the very heart of Ulster.

“The SDLP has never and will never deny or dilute the complex mix of identities which contribute to the richness of Ireland.”

The SDLP is campaigning to remain in the EU ahead of the UK membership referendum on June 23rd.

“This party has the heritage and the calibre to lead the debate on staying loyal to the European Union, ” Mr Eastwood said.

“Between now and June the 24th (sic), that is exactly what we in the SDLP will do.

“And to those who have come here and made their homes here, from Poland, Slovakia, Lithuania, Latvia and across the European Union I say to you tonight - we won’t let your families be divided, we won’t allow new borders on this island or in Europe, we, the Social Democratic and Labour party, we’ve got your back.”

Mr Eastwood ended his speech by urging voters to support the SDLP on May 5th and gave a nod to another great Irish poet, the late Nobel laureate Seamus Heaney. who once said that the “voice of sanity is getting hoarse”.

“But our voice is back and is getting stronger by the day,” he said.

“The SDLP is back in the conversation.”

1 Three relatives dead after apparent murder-suicide in Kanturk, Co Cork
2 Gardaí not seeking anyone else in relation to Cork shooting deaths
3 Cork suspected murder-suicide may have been over disputed will
4 Woman stranded in Ireland due to pandemic has ‘miracle baby’
5 Gardaí say 52 people who went missing in 2020 not yet found
Real news has value SUBSCRIBE