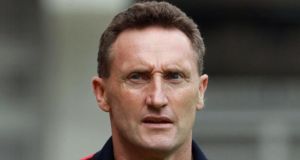 Peter Fitzpatrick had suggested he could run for a different part amid rumours of Fine Gael putting an extra candidate forward in Louth. File photograph: Donall Farmer/Inpho

A Fine Gael TD who said he was not standing for the party in the general election has changed his mind following a meeting with Taoiseach Enda Kenny.

Louth deputy Peter Fitzpatrick is understood to have secured a commitment from the Fine Gael hierarchy that the party ticket in the constituency will comprise only two candidates.

Mr Fitzpatrick and Fergus O’Dowd will both now be hoping to hold their seats for Fine Gael, and will have to come through a selection convention.

It had been speculated Fine Gael could have opted for a three candidate ticket in Louth, with possibility of the third candidate being a woman.

Mr Kenny met Mr Fitzpatrick – a former manager of the Louth football team first elected to the Dáil in 2011 – following the weekly meeting of the Fine Gael parliamentary party on Wednesday evening.

Mr Fitzpatrick is also understood to have met party officials on Thursday, and sources suggested he had been angered over some statements made by some in the party and sought an apology.

After announcing he was not standing for Fine Gael, Mr Fitzpatrick, who did not return calls, then suggested he could stand under a different banner, which reduced sympathy for him in the party.

“We mostly felt sorry for him, but that annoyed people,” said one TD.

Earlier this month, Mr Fitzpatrick said: “Over the next number of weeks and with the help of my family I will be reflecting on my future plans and will make a further statement at that stage.

“The last four and a half years have been both enjoyable and rewarding working on behalf of my constituents and I am looking forward to continuing my work in Dáil Éireann over the coming months.”