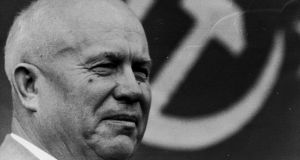 Former Soviet premier Nikita Khrushchev with the hammer and sickle symbol behind him. Photograph: Express

Russian president Nikita Khrushchev sent a case of wine to leading Irish diplomat Freddie Boland in an effort to mend fences after a furious row between them at the United Nations general assembly which has gone down in the annals of the organisation.

During furious exchanges in October 1960, Khrushchev famously took off one of his shoes to hammer his desk while Boland, who was chairing the session, broke his gavel in a vain attempt to restore order. The episode features in the latest volume of Documents in Irish Foreign Policy 1957 to 1961 to be published this week.

The shoe-banging incident happened during a plenary meeting of the UN general assembly in New York when Khrushchev attempted to protest at a speech by the leader of the Philippine delegation Lorenzo Sumulong, which denounced Soviet oppression in eastern Europe.

There are varying accounts of Khrushchev’s actions. Some say he banged his desk with his shoe, others that he made his way to the rostrum, brushed Sumulong aside, and began to hammer the rostrum denouncing the Philippine diplomat as “a jerk, a stooge, and a lackey” of American imperialism.

Boland managed to restore order for a bit but a Romanian minister then intervened to back Khrushchev and denounce Boland for not defending the Soviet leader. The assembly degenerated into further disorder and Boland broke his gavel while trying to regain control.

In a letter sent a week later to the secretary of the department of external affairs, Con Cremin, Boland made light of the incident which had attracted worldwide attention and referred to his dealings with Khrushchev during the UN session.

“Although I saw a good deal of him and had many talks with him, K is to me a complete enigma. He is the personification of elemental violence. Moreover, like Hitler, he is power-drunk and a doctrinaire,” he wrote. “These dangerous qualities are tempered in his case, however, by an extraordinarily sharp intelligence, a keen sense of humour and, I would say, a good deal of plain humanity. He doesn’t carry his official resentments into his personal relations.

“When Hammarskjöld [UN secretary general] attended his official reception, K greeted him jovially and even embraced him. He sent Zorin (a Russian diplomat) in to see me the morning after his departure to express his regret for not having been able to call on me to say good-bye and to inform me that he (Khrushchev) was ‘well satisfied with the objectivity of the chair and hoped it would continue’. That evening a case of Russian wine was delivered at 1 East End Avenue with his compliments!”