Officials tried to get JFK to visit Dublin in 1961 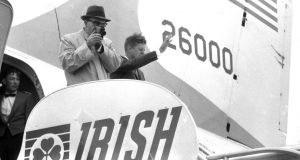 From the moment John F Kennedy was inaugurated as US president in January 1961 the Irish authorities started angling to get him to visit the State.

When it was announced that Kennedy and his wife would visit Paris at the end of May the secretary of the department of external affairs, Con Cremin, wrote to the Irish Ambassador to the US Thomas Kiernan asking him to explore the matter.

In his April 1961 letter, published in the latest volume of Documents on Irish Foreign Policy 1957-1961, Cremin referred to the fact that the president was visiting Paris primarily for the purpose of meeting Charles de Gaulle.

“The news available to us does not make it clear whether they will visit other capitals or how long they intend to spend on this side of the Atlantic. If the president and Mrs Kennedy should desire to come to Dublin they would, of course, be heartily welcome,” he said.

“We do not wish, however, to take advantage in any way of the president’s friendly sentiments for Ireland or to embarrass him by, eg, issuing a formal invitation which he might in the circumstances feel it difficult to refuse. Nevertheless, his coming here would be a source of great satisfaction and the nature and programme of the visit would naturally conform entirely with his personal wishes.”

He asked the ambassador to take a suitable opportunity of “making known to the president very discreetly our attitude in the matter”.

Responding few days later the ambassador said: “You may take it for certain that President Kennedy will not visit Dublin. I will, however, avail of any suitable opportunity of making known to him our attitude as described in your confidential letter of the 11th April”.

He went on to say that Kennedy was annoyed at the pressure being brought to bear on him to receive foreign heads of government at this early stage of his administration.

He was irritated at not being given, in many cases, any pretext to avoid the unwelcome visits. The president’s chief of protocol told Kiernan that the usual formal excuses were not being accepted and other countries were trying to tie down dates for meetings.

“This is so in regard to the visit this week of the prime minister and the foreign minister of Greece; and in regard to the forthcoming visit of Bourguiba (president of Tunisia) who has been particularly insistent, although when he comes, his son will have already been accepted here as the new Tunisian ambassador.

“The president has been compelled to leave the United States to see de Gaulle because de Gaulle will not come to Washington and the president deems it necessary,” wrote Kiernan.

Man to appear in court in connection with Donegal firearms incident 21:55
Youth arrested in connection with alleged assault on garda 21:52
Cork GAA honours martyred Lord Mayors with commemorative jerseys 21:52
Boy (11) dies after being struck by van in Co Donegal on Friday 21:43
Brazilian father to be deported days after daughter’s birthday 17:50