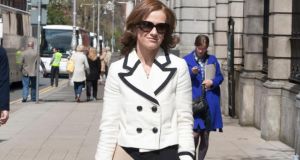 Master of the National Maternity Hospital Dr Rhona Mahony arrives for the committee hearings on the Heads of the Protection of Life during Pregnancy Bill 2013 at Leinster House yesterday. Photograph: Gareth Chaney/Collins

There were differences between the masters of two Dublin maternity hospitals on the suicide provision in the Protection of Life During Pregnancy Bill during the first day of the abortion legislation hearings in Leinster House yesterday.

The Oireachtas committee on health, under the chairmanship of Fine Gael TD Jerry Buttimer, was hearing medical submissions on the heads of the Bill. There will be further hearings on Monday and Tuesday.

Dr Rhona Mahony, master of the National Maternity Hospital, said the life of the foetus must be vindicated where it was practicable.

“This obligation has underpinned my own clinical practice over 17 years and will continue to do so,” she added. “In current practice, all efforts are exhausted, within the medical margins of safety, to prolong pregnancy in the foetal interest.”

Dr Mahony said this was regardless of the indication for termination of pregnancy which, in the context of the legislation, would be to save a woman’s life. Neonatal survival was now possible from as early as 23 weeks’ gestation.

It was her experience that the majority of women did not wish to lose their babies, but they did not want to die, she said. She added that one could be forgiven for thinking that the Bill was about the risk of suicide in pregnancy.

“It is not,” she added. “It is about saving women’s lives, regardless of whether that risk to life is physical or mental.”

Dr Mahony said a woman who was intent on suicide was indeed at risk of dying. She needed to be assessed appropriately, believed, and expert psychiatric care provided.

Dr Sam Coulter Smyth, master of the Rotunda Hospital, said the loss of life from self-destruction was an extraordinarily rare situation, with incidence of suicide in pregnancy of the order of one in a half-million pregnancies, as per UK figures.

‘No evidence’
“Our psychiatric colleagues tell us that there is currently no available evidence to show that termination of pregnancy is a treatment for suicidal ideation or intent and, as obstetricians, we are required to provide and practise evidence-based treatment,” he added.

“It, therefore, creates an ethical dilemma for any obstetrician who is requested to perform a termination of pregnancy with the treatment of somebody who has suicidal ideation or intent.’’

Dr Coulter Smyth said he was sure the legislation was designed to create clarity and reassurance for both health professionals and patients alike.

Ethical issue
The fact that there was no gestational limit relating to suicide was a major ethical issue for obstetricians. He said that delivering a baby of 25 weeks’ gestation, in the case of a woman deemed to be suicidal, could lead to death because of extreme prematurity, cerebral palsy or other significant developmental issues. He added that his overriding concern related to the lack of evidence to show that termination was of any assistance in that area of self-destruction and pregnancy.

“In relation to infrastructure and resources, it is my view, and the view of many of my colleagues, that the inclusion of suicidality within the legislation may, and I stress may, in the long term, lead to an increased demand for termination in this country,” he added.

He said in excess of 5,000 women annually go to the UK to have termination procedures performed.

“We cannot be certain how many of these women would decide to use the current legislation as a means of obtaining a termination in this country,” he added.

He said he welcomed the fact that the legislation provided for a termination of pregnancy in an emergency situation.