Bill on minimum pricing of alcohol due before Dáil recess 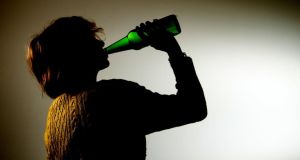 Leo Varadkar said the Public Health Alcohol Bill would be the “most far-reaching proposed by any Irish government, with alcohol being addressed for the first time as a public health measure” in a country ranked fifth out of the 28 EU members for alcohol consumption, and second across Europe for binge drinking. File photograph: Dominic Lipinski/PA Wire

Legislation aimed at reducing Ireland’s significant problem with alcohol will be published before the Dáil summer recess and introduced in the Oireachtas in the autumn, the Minister for Health has confirmed.

Leo Varadkar said the Public Health Alcohol Bill would be the “most far-reaching proposed by any Irish government, with alcohol being addressed for the first time as a public health measure” in a country ranked fifth out of the 28 EU members for alcohol consumption, and second across Europe for binge drinking.

In a debate in the Seanad, Mr Varadkar said 75 per cent of all consumption of alcohol in Ireland is done during binge-drinking sessions. Alcohol was not abused by a small minority, and “the majority of people who drink do so in a harmful way”.

Mr Varadkar reiterated the Government’s commitment that minimum unit pricing to eliminate very cheap alcohol from stores would be introduced, and said currently “a woman can reach her low-risk weekly drinking limit for just €6.30, while a man can reach this weekly limit for less than €10”.

Mr Varadkar said “ultimately, the price needs to be set at a level that will reduce the burden of harm from alcohol use or it will be ineffective - but not so high that it increases the cost of a pint in the pub or a glass of wine in a pizzeria”.

She had asked the Child and Family Agency, and they said “they’re thinking about it. They should have no truck with the drinks industry.”

Senator Labhrás Ó Murchú (FF) said children were the main victims of the abuse of alcohol, whether in the home or elsewhere, and “that alone should make us more determined and courageous than we have ever been before on this issue”.