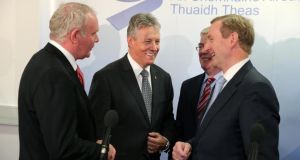 Taoiseach Enda Kenny has joined political leaders in Northern Ireland and the Republic in condemning a suspected dissident republican murder attempt on the life of a former PSNI officer.

The NSMC, which was attended by 24 Ministers from the Government and Northern Executive, discussed a wide range of issues including expanding North-South co-operation.

Threat
However, the first issue raised at the press conference afterwards yesterday was the failed dissident attack near Tullycarnet in east Belfast and the overall dissident threat which remains at a severe level.

Dissidents attempted to kill the former officer in a fashion similar to the under-car bomb attack that claimed the life of Constable Ronan Kerr in Omagh in April 2011.

Police said it was only due to the officer’s vigilance that no one was killed or injured. The former officer spotted the device when he checked under his car as he was about to bring his 12-year-old daughter to school.

First Minister Peter Robinson said in Armagh that all the leaders had deplored the incident. “I think everyone recognises that there are some elements of our society who have not caught the public mood that wants to move forward.”

“Politically they will not block the progress that has been made. We will continue to work together to make a better community for our people to live in,” he added. “It is to be regretted that there are still Neanderthals out there who believe this is an appropriate way to advance whatever they believe their cause to be,” he said.

‘Moving forward’
Mr McGuinness “unreservedly condemned this attempt to take the life of another human being”. He said Northern Ireland had emerged from a “very cruel conflict” and that dissidents could not be allowed to succeed. Anyone with any information about such activity had a duty to bring it to the Garda and PSNI, he added.

“We are moving forward and under no circumstances are we going to tolerate a situation where small, unrepresentative groups believe they have a right to plunge us back to the past. It isn’t going to happen. They are living in cloud-cuckoo land and they need to waken up and recognise the futility of the actions they are involved in,” said Mr McGuinness.

In condemning the attack, Mr Kenny said the level of co-operation between the Garda and PSNI was at an “exceptionally high level”, while Tánaiste Eamon Gilmore also said the Government and Executive were “determined not to be driven back to the past”.