No cash for public pay rises until 2018, warns Taoiseach 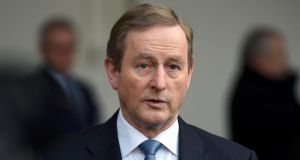 Taoiseach Enda Kenny: signalled that the Government will engage in talks with unions on a successor to the Lansdowne Road pay accord. Photograph: Clodagh Kilcoyne/Reuters

Taoiseach Enda Kenny has signalled that the Government will engage in talks with unions on a successor to the Lansdowne Road pay accord, however he appeared to warn there will be no money available next year for further rises.

Public-service trade union leaders are to meet on Wednesday to consider a formal response to what many of them see as the Government’s breach of the Lansdowne Road deal in its acceptance of a Labour Court recommendation which offered gardaí a pay package worth more than €40 million.

Many unions want the pace of pay restoration for all public servants accelerated in the wake of the offer made to gardaí.

Mr Kenny told RTÉ on Sunday it was well known that there had to be a successor to the Lansdowne Road agreement – which is not scheduled to expire until September 2018 – but that the financial ceilings for 2017 had been set and Ministers had already been given their allocations for the year.

He said that while the Government would engage with trade unions it did not “have the resources and money to deal with all claims that came in or are coming in”.

The Government has set aside an additional €290 million to meet the cost of pay rises due next year under the Lansdowne Road agreement.

There is no money allocated in the 2017 budget for any other increases – including the cost of the pay offer for gardaí, which is now expected to be funded largely through the existing resources of the Department of Justice.

Some Cabinet Ministers are understood to believe privately that the Government should reach a new collective agreement with the public-service unions rather than leaving the Government facing a number of successive disputes in different sectors. They believe this would be less expensive in the long run.

Siptu leader Jack O’Connor has effectively set the Government a deadline of this Thursday to agree in principle to enter talks on a new pay deal – a process which he wants to commence by February – or his union will authorise strike ballots among its 60,000 public-service members.

Some senior political figures suggested that the Government could bring forward the introduction of a successor deal to Lansdowne Road which could then itself run over an extended period, perhaps up to four years.

However, other senior Government sources suggested that Ministers who were privately briefing media over the weekend about the need to secure an early deal with unions were simply considering their own sectoral interests.

Mr Donohoe told The Irish Times on Sunday that officials in his department would be engaging with the public-services committee of the Irish Congress of Trade Unions this week.

“This engagement, and the timeframe for it, are driven by the Government commitment to maintain the Lansdowne Road agreement as it offers the best way of meeting wage needs of public servants, meeting front-line recruitment needs and recognising needs of the broader tax-paying public.”

Mr Donohoe will bring a memo to Cabinet on Tuesday on the issue of public-sector pay but this will be for information only. It will also only outline the future recruitment needs in the public sector, with up to 9,000 new recruits needed each year to keep pace with demographics.

It remains to be seen whether public-service unions would be prepared to settle for early talks on a successor to Lansdowne Road which would not actually deliver any additional money for their members until 2018.

In a bulletin on its website the Public Service Executive Union – which represents about 10,000 mid-ranking Civil Servants – maintained that the proposed Garda deal was a “game-changer” .

“The gardaí were not part of the Lansdowne Road agreement. Yet an offer has been made to gardaí that not only accelerates the restoration of what they lost in recent years – but it does so at a pace and rate greater than that which is on offer to those of us who signed up to Lansdowne Road. There is absolutely no question that this acceleration should now apply to all public servants.”

“It is true that the Government, during the past week, insist that they do not have the money to accelerate restoration for all. But – if I can be blunt – that is their problem. They’ve now set a precedent for accelerated restoration. They need to fund it for all.”