Michael McDowell ‘not aware’ of recordings 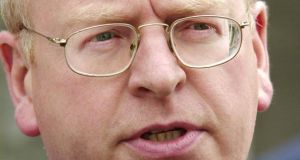 Michael McDowell: “I am not aware of any plans to record all telephone calls to Garda stations”

Former minister for justice Michael McDowell said during his tenure in office he was “not aware of any plans to record all telephone calls to Garda stations”.

Speaking in the Dáil yesterday, Minister for Justice Alan Shatter said the recordings took place “over a period of up to 30 years”.

“As with other matters under investigation, these are issues which far pre-date my tenure as Minister for Justice. This issue is one that existed throughout the lifetime of the previous government and, indeed, we now know the recording system was upgraded during that government’s term of office in 2008.

and I will not make any accusations in that regard.”

It is understood Mr McDowell was unaware of the possibility of any such recordings, as disclosed in recent days, and in reply to a 2006 parliamentary question from former Independent TD Tony Gregory, said he was only aware of the recording of emergency and radio traffic calls.

The late Mr Gregory, a former TD for Dublin Central, asked Mr McDowell, who was minister between 2002 and 2007, “his views on the introduction of the recording of all telephone calls to Garda stations and the replies given in the interests of greater efficiency and public confidence in the Garda”.

“An Garda Síochána depends on the public to provide information to assist in preventing and detecting crime and such information is provided on a confidential basis, often by telephone,” Mr McDowell added. “Prisoners detained in custody in Garda stations are entitled to telephone their family and their legal representatives and such calls are made in private.

“I am not aware of any plans to record all telephone calls to Garda stations.”