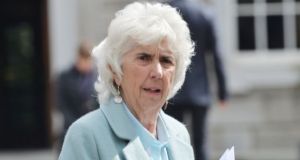 Independent TD Maureen O’Sullivan says she stands over her letter expressing dismay at the length of time Donal Ó Coisdealbha had spent in custody.

“I stand over the letter, there was no attempt to interfere with the judicial process,” she told RTE’s Morning Ireland.

Ms O’Sullivan said that she wrote the letter in terms of his bail hearing and was dismayed that it had been taken as an endorsement of violence.

“Anyone who knows me knows there is no way I would endorse physical force.”

At the sentencing hearing on Tuesday Ms Justice Kennedy referred to a letter written by Ms O’Sullivan, dated from July this year, which expressed some dismay as regards the length of time Ó Coisdealbha had spent in custody.

The judge referred to a “puzzling” expression in Ms O’Sullivan’s letter which said that nothing was to be gained by prolonging Ó Coisdealbha’s period on remand.

The court could only surmise, she said, that the content in the testimony came about in circumstances where the writer was unaware of Ó Coisdealbha’s decision to plead guilty.

Ms O’Sullivan confirmed to Morning Ireland that she had been unaware that Donal Ó Cosdealbha was going to plead guilty.

“The letter was written in the context of an application for bail. I was highlighting why people are left so long on remand.

“No way was I condoning or endorsing or supporting what he was pleading guilty to.”

Ms O’Sullivan said she thought the judge took a major leap in her surmising and had taken two and two and gotten 144 not four.